The anticipation was rising as my daughter kept poking her head up and down in the restaurant booth, as she kept looking towards the entrance, waiting for the familiar face. We had been sitting down waiting for all of three minutes but I had heard, “How much longer until she gets here?” about 59 times. After all, it’s not every day you meet a local celebrity that was your inspiration for the Kids Adventure Games Stevens Pass! 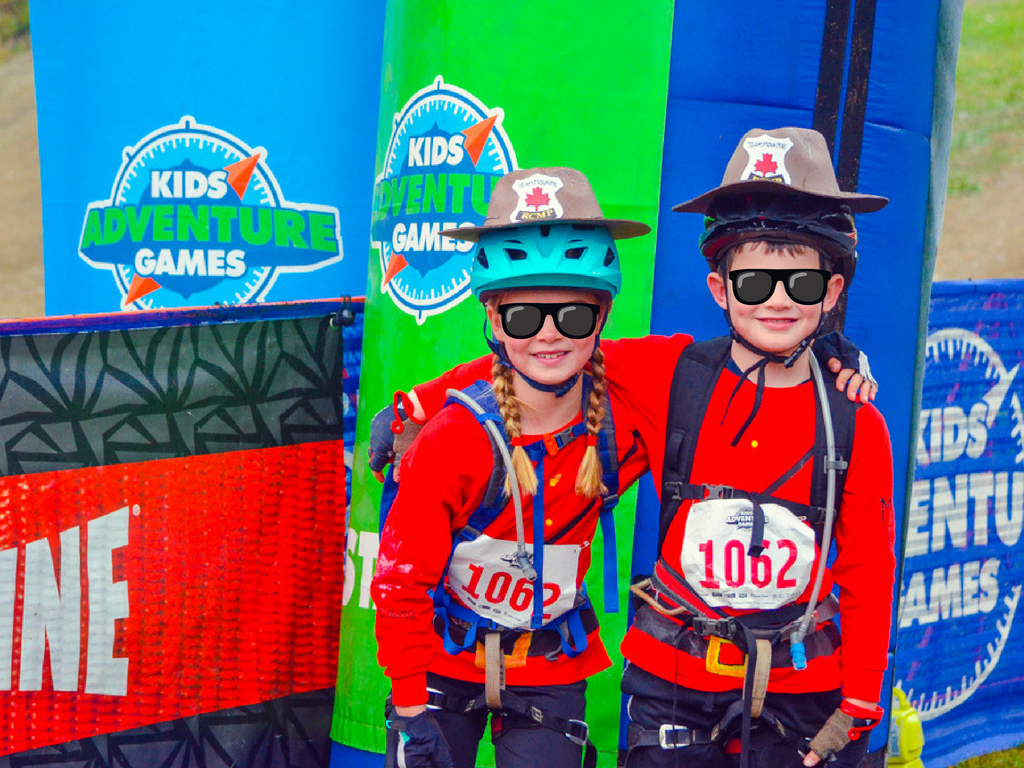 After my kids had run their first Kids Adventure Games Stevens Pass as “Team Mountie” we posted photos and videos to social media to showcase how they had been inspired by The Amazing Race’s Courtney and Taylor, Team Mountie. What happened next was truly incredible.

Yes, in my Instagram inbox were messages from both racers congratulating my kids on their own “Amazing Race” by Kids Adventure Games Stevens Pass and asking if they could send us a little gift. My kids lost it. After spending the whole summer cheering on Taylor and Courtney, not only did the TV stars know who Otter and Mountain Goat were, but they wanted to send them something. My daughter fell off her chair, “I just can’t believe it!”

Back to where we started… an anxious girl pacing in the booth at our local White Spot where she was waiting for someone special to walk through the front doors. A cute blonde with beautiful curly hair walked through and my daughter leaned over, “Mom, it’s Courtney and she’s SO pretty!”

A few quick hellos and the kids jumped into their list. They were going to interview their first “celebrity” and there was no time for messing around! My kids had prepped 5 pages of questions and answers and wanted to dig in!

About Courtney and Taylor

Courtney and Taylor Callens were on Amazing Race Canada’s Hero edition this past summer. As 4th generation RCMP officers, they were called “Team Mountie” and represented the red surge with their hard work, dedication, and commitment to never giving up. As a brother and sister duo, my kids connected with them immediately and loved cheering them on as they could easily relate to the deep sibling bond they shared.

What was it like racing with a nut allergy?

“I relied heavily on the production team to ensure that there were no nuts in the food that was provided… however, there still were moments where I felt uneasy as I like to be in control of my food. But there were a couple of us on the race with allergies so that helped!”

What was it like having cameras in your face? How many cameras were filming you at once?

“There was one camera person and one sound person in each car. It was overwhelming for the first five days of the race as I wasn’t used to having a camera monitoring my every move. But we quickly got used to it and it started to feel like the cameras weren’t there. Eventually, I forgot to filter what I said, and all the real feelings came out! We did love hanging out with the crew though and they became all of our friends!”

“It varied dramatically, some of our race days were 12 hours and some lasted as long as 72! There was downtime though on airplanes, or if we were in between races on break days. We’d get to hang out in the hotel and wait for an envelope to arrive. Inside it would say, “Be ready to race at…” and then it would be go-time again.”

When did the interviews happen?

“The interviews took place after we landed on the mat (and had a bite to eat). It was tricky at times as we had to talk in first person depending on the story that they wanted to capture. Truth bomb: Taylor was really bad at that so it took several takes to capture and we were often there for twice as long as other racers!”

Were Phil and Martina as awesome as they looked?

“More Awesome, Martina is full of so much energy that she had to bring it down a notch for TV” We were shocked, we didn’t think a person could have any more energy! “Martina was such a kind, sweet, and fun person to be around, I’m so lucky to have met her on the race”

Then it was my son’s turn:

How did you become a Mountie?

“I had to go to school in Regina. There I was able to learn how to drive a car fast, shoot a gun (although I’ve never had to shoot it for work), learn how to wrestle, do physical and mental training, and fun things like marching!”

How did you train for the race?

“As RCMP officers we have to stay in good shape, so we just kept our training up so that we’d be in a good physical position to compete.”

How long were you gone for?

“5 weeks!” Being gone from home for 5 weeks is a long time. Fortunately, both Courtney and Taylor were able to use their vacation to get the time off. We all thought that was a really long time!

What was it like to play the amazing race?

“It was one of the best experiences of my life and such an honour to do it with my brother. I’ll never forget it!”

After breakfast, we were introduced to a very special member of Courtney’s family… Gunner! Gunner is a 2-year-old Entlebucher Mountain Dog who was very excited to meet us.

Now that my kids had their chance, it was my turn!:

Was there any made for TV Drama?

“Not really, what you see is what you get. The rules of the game are true, for example, if you drop your bag and it doesn’t make it to the mat, you lose it for the rest of the race!”

Any advice for someone wanting to apply?

“Do it! Don’t overthink your audition tape. Ours was a quick video with Taylor video conferencing in and me sitting at my kitchen table, nothing special. We just quickly shared who we were and why we wanted to be on the race. I like to think we started off on a great foot when I forgot how old Taylor was and finished with “Call Me Maybe?” But before we knew it we had a callback, and then another one, and it wasn’t until the final phone call that we were told we were actually going to be on the race that we believed it!”

Did you know it was going to be a hero’s edition?

“We didn’t know right off the bat, but we did know during the application process. We figured we might be a first responder team, but then we showed up and saw we were Team Mountie!”

And now for some rapid-fire questions!:

What challenge pushed you outside of your comfort zone?

“Hi-Li (this isn’t how you spell it). Taylor is (and has always been) the athletic one. I didn’t work out until I joined the RCMP 5 years ago. Once I realized I was learning a new sport, I knew we were doomed!!”

What surprised you the most about the race?

“I was surprised at how fair it was. The show really does have legitimate rules, things are almost exactly like you see them on tv, just edited for time length. I was also surprised to see how competitive I got, and how competitive Taylor wasn’t at times! Not playing sports I didn’t think I’d be the one lighting the fire under us, and at one point Tay had to reign me in. During the finale after Tay wiped out, I was yelling at him to get up and keep going, not realizing what a huge wipeout it was. Oops!”

What song do you always have to dance to when it comes on the radio?

“Ever heard Chattahoochee by Alan Jackson? Either than or Sold by John Michael Montgomery. I’m a huge country fan!”

“My parents say I LOVED Cinderella when I was a kid!”

If you could have dinner with one person (dead or alive) who would it be?

“Most definitely my Grandfather. It would be nice to say hello and give him one last hug.”

What’s your next big adventure?

“I got married in July, so right now we are planning a trip to the Philippines in February! The race was so action-packed, it will be nice to now go on a vacation and just be able to bury my toes in the sand.”

Check out these articles on some very inspirational people we have crossed paths with!