Last weekend we were fortunate to attend a community outreach initiative with a friend called “Girls Fly Too”. The event was founded by Kirsten Brazier in 2012. Kirsten is an Airplane and Helicopter pilot from the Lower Mainland who wanted to create an accessible event to educate and inspire women and girls to think about aviation as a career field worth exploring.

The reality is that “of 24,505 professional pilots in Canada only 1356 of them are women. Out of 19,601 aircraft engineers, only 560 of them are women. Less than 3% of the technical positions in the Royal Canadian Air Force, such as pilot or maintenance technician, are held by women. While the percentage of women in many other professions continues to grow, the percentage of women employed in the aviation and aerospace industries remains low.” (Girlsfytoo.ca)

So in celebration of International Women’s Day AND “Women of Aviation Worldwide Week” (I didn’t know this existed.), the back side of the Abbotsford Airport was transferred into a place where anything is possible and dreams come true. 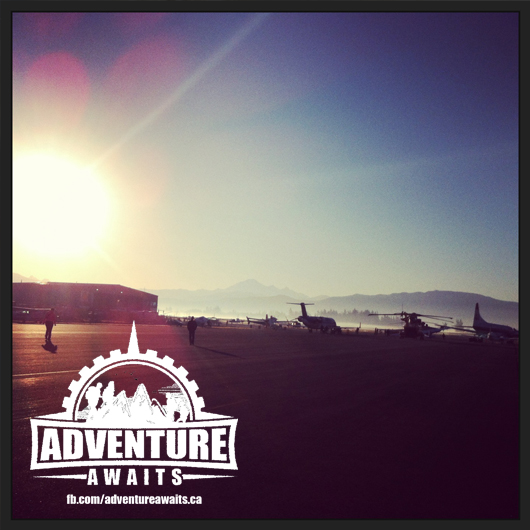 The morning air was crisp as we walked across the tarmac in anticipation for our day.

We arrived to a beautiful sunrise and a tarmac full of airplanes of all types. There were float planes, military helicopters, search and rescue helicopters, ultra-light planes, RCMP cars, and more types of planes then I could list.

We quickly lined up in anticipation for our 9:30 flight. Unfortunately the morning came quickly and there was some kinks to be worked out so the wait was longer then the little girls’ legs would have liked. But after a few jumping jacks and some songs we were in our seats waiting for our turn for a FREE Helicopter ride! The girls were pumped, it was almost time!

A young cadet came over and welcomed us to follow him to the boarding area. We were quickly escorted to our helicopter, a cute 4 passenger machine. I was proud of my daughter for jumping at the chance to hop in the front seat next to the Captain. The girls were vibrating with excitement as they put on their headphones and talked in their mics.

The pilot was a very kind gentleman who had donated his helicopter and his services to the day. He asked the girls if it was their first time flying and after they responded, “Yes” He said, “Me too.” The girls believed him, it was quite entertaining.

Before we knew it the turbines were speeding up and it was getting noisy inside our little ‘copter. And a squeal of excitement let out as we were airborne and off on our air adventure. I was your typical proud mom alternating between taking photos and video. I tried to capture as much as possible… here’s the video summarizing our experience.

The weather could not have been better and it was awesome to seek out landmarks like Mill Lake Park, Sumas Mountain, the Mission Bride, and Rotary Stadium. The tour around the beautiful city of Abbotsford was fabulous!

The girls were scared to land, probably because of the big bubble windows that made you feel as if you were enjoying your ride from outside of the helicopter! But touching down was “like landing on a cotton ball” a truly amazing experience for a group of 6 year olds to have!

After we disembarked we were led back to meet our group and the girls were jumping up and down with excitement as they shared the trip highlights. “We saw the wakeboard park lake” “We saw the hospital” “WE GOT TO WEAR HEADPHONES” Ahhh, perspective only a first time flier can give you.

After the ride we headed off to enjoy the other activities. This included exploring military helicopters, getting face painting done and using real tools to make a keychain. It was neat to see my daughter use a riveting tool to make her own rivets on her own keychain. She was very proud to come home and show Dad her handiwork. 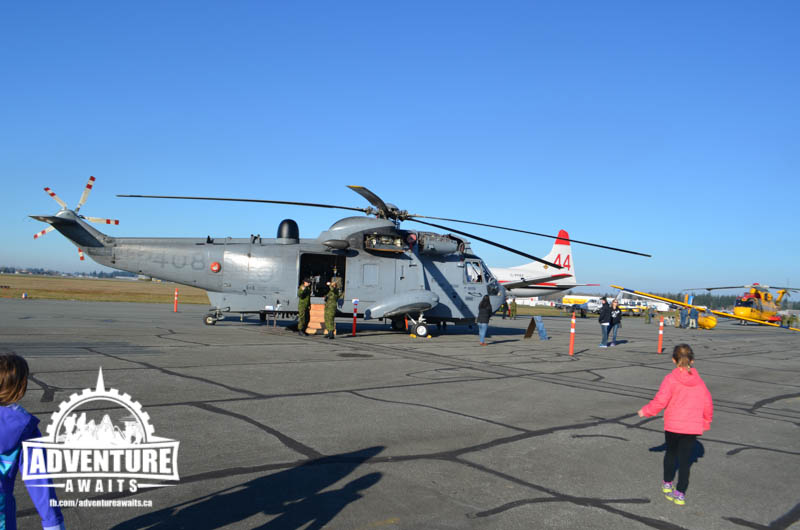 Checking our our military and meeting female soldiers! What an opportunity! 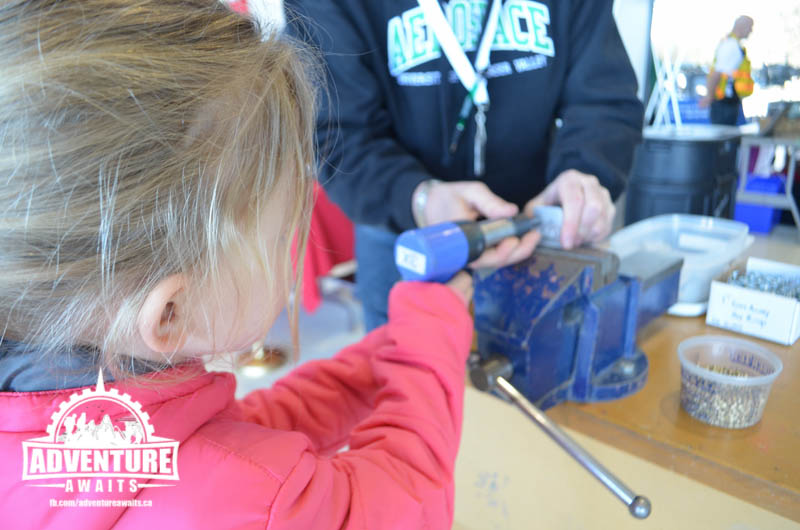 The kids got to use the tools! Thanks UFV for the opportunity! 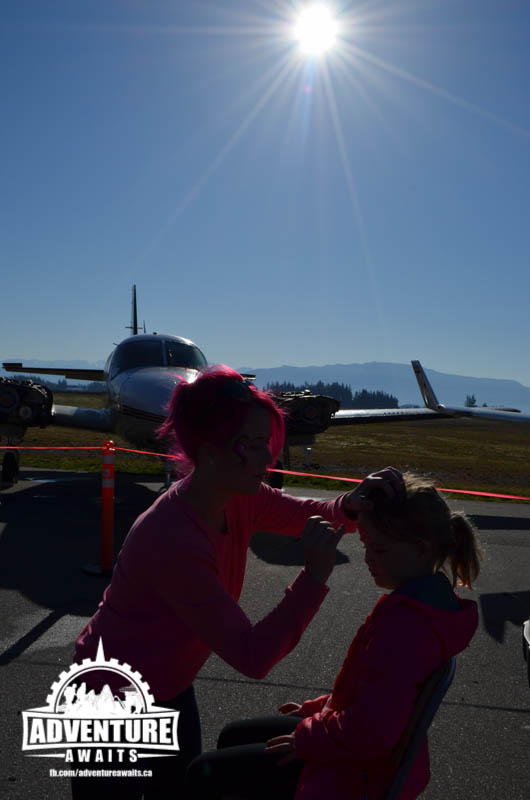 Face painting! One of the “extras” of the day!

The goal of the event was to Educate, Inspire, and create new leaders. Needless to say I wouldn’t be surprised if this inspires some of the thousands that attended to look at aviation as a field where girls can play too. 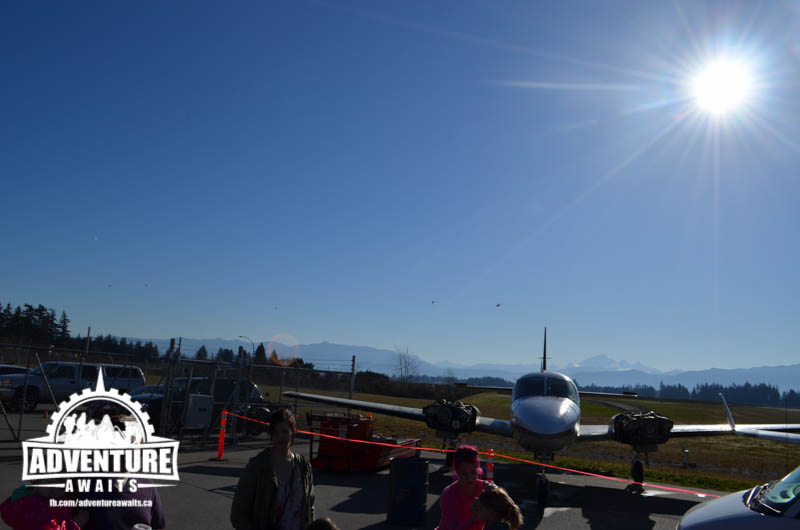 What a beautiful day out at Abbotsford Airport! 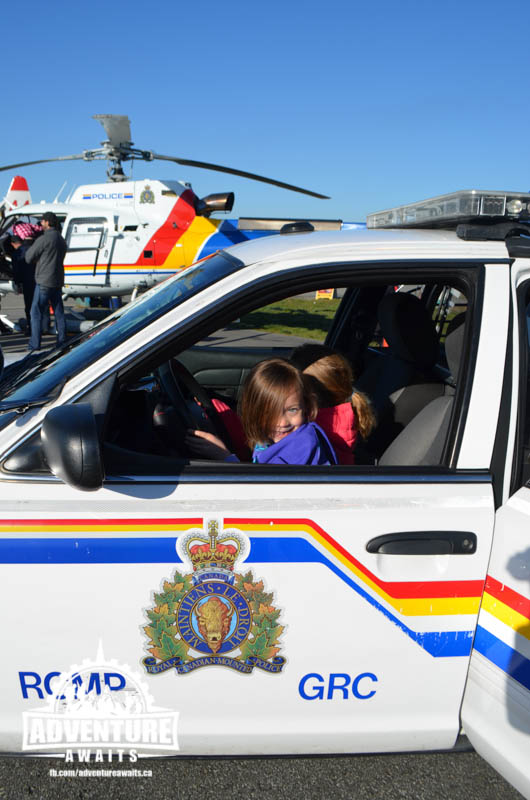 Let’s hope that if they ever spend time in the cop car it’s only in the driver seat!

Note: I wanted to thank all of the volunteers that made this happen. From the young cadets on the ground, to the pilots who donated their time and resources, to the female soldiers who got down on their knees to make themselves approachable and took the time to connect with each girl. It was really moving to see how passionate everyone was to pull off a high quality event and make every girl feel connected to the industry.

If you’re thinking about going to one of these events in the future (I highly recommend it) I would make the following suggestions: 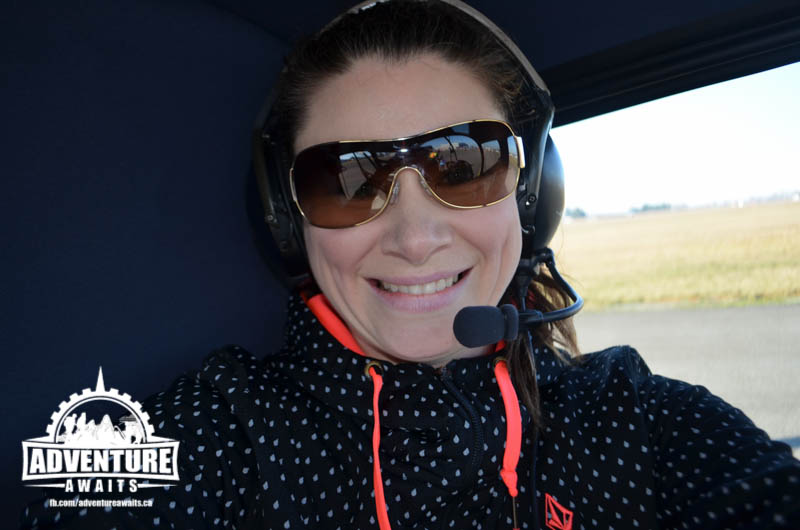 Time to put the headphones on in the helicopter!

Overall I highly recommend this event. Having so many inspiring women to meet and share their stories really is a special opportunity… and a free flight in the helicopter, well that definitely adds an element of inspiration and “coolness” to the experience.