It was about a year ago that my followers saw a YouTube video adventure and my Facebook notifications went through the roof. I can’t tell you how many times that I was tagged and everyone said, “You HAVE to do this!” So when I was invited by Kauai Backcountry Adventures to actually check it out, we knew we had to go!!!

My kids were unsure of what to expect when they heard the term tubing. “Will we be towed behind a boat?” “Will we be going down a water slide?” and the questions kept coming until we finally said, “You’ll be floating through a sugarcane plantation in the irrigation tunnels”. It was enough big words to stop the questions and help them learn an important tip when travelling – some things just need to be experienced. 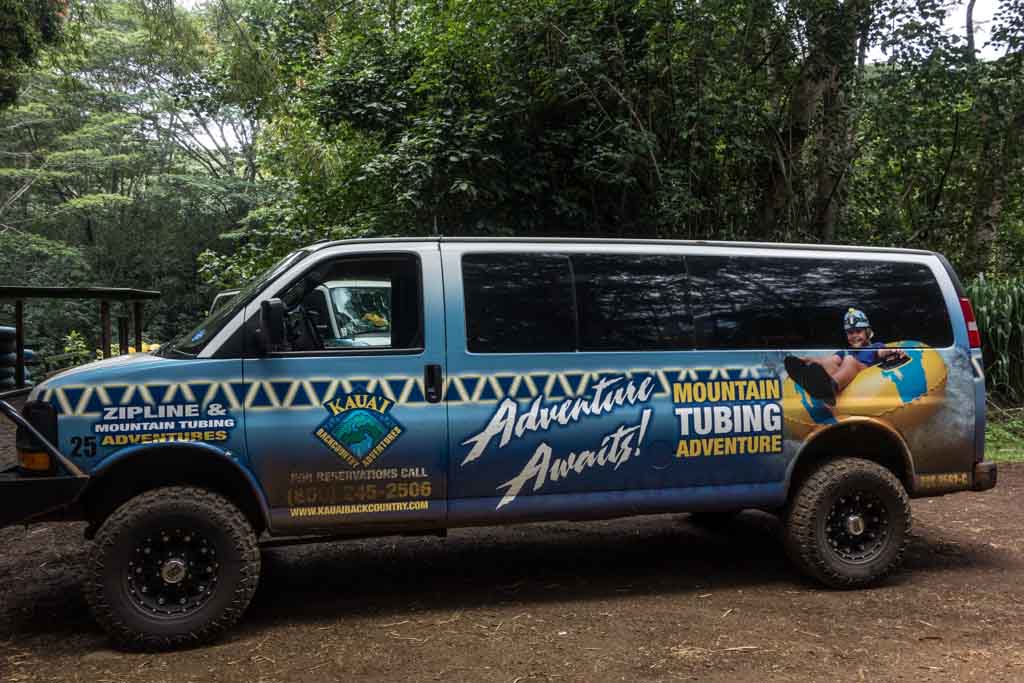 Upon arrival at the Kauai tubing adventure headquarters, we were welcomed by several large signs and vehicles that said, “Adventure Awaits!” I’ve never felt so welcomed! (And my kids were so excited as they thought the signs were done up for us!) 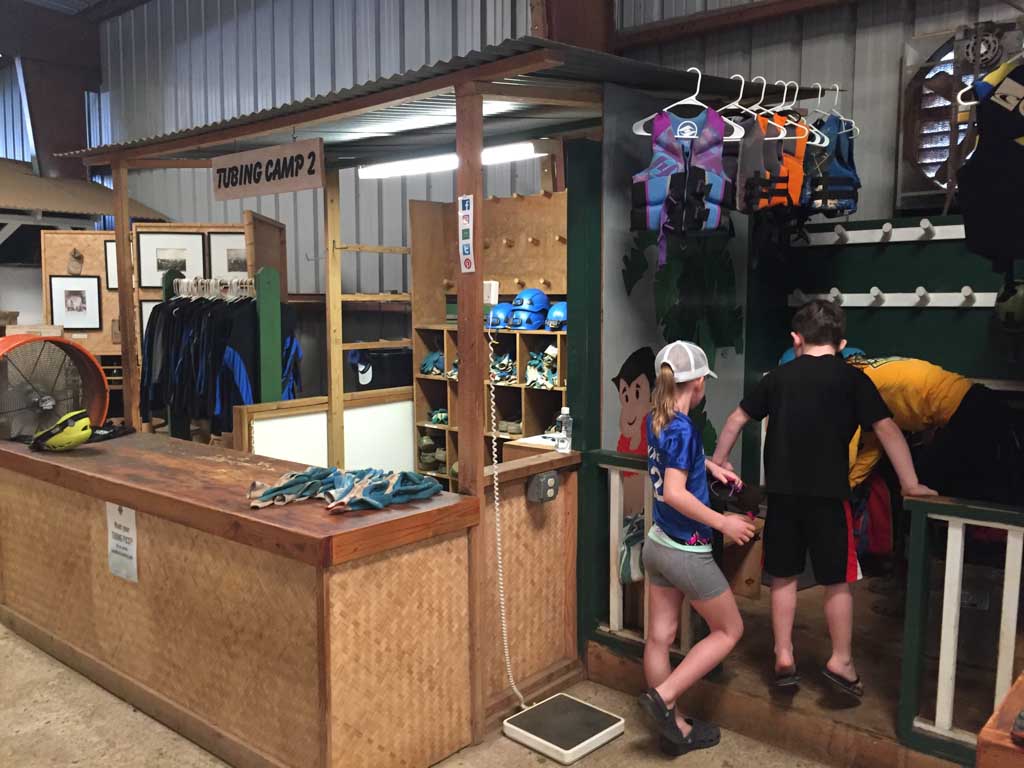 After we got our gear on, which included helmets, gloves, shoes, and bathing suits, we were loaded into the Adventure Van and on our way! 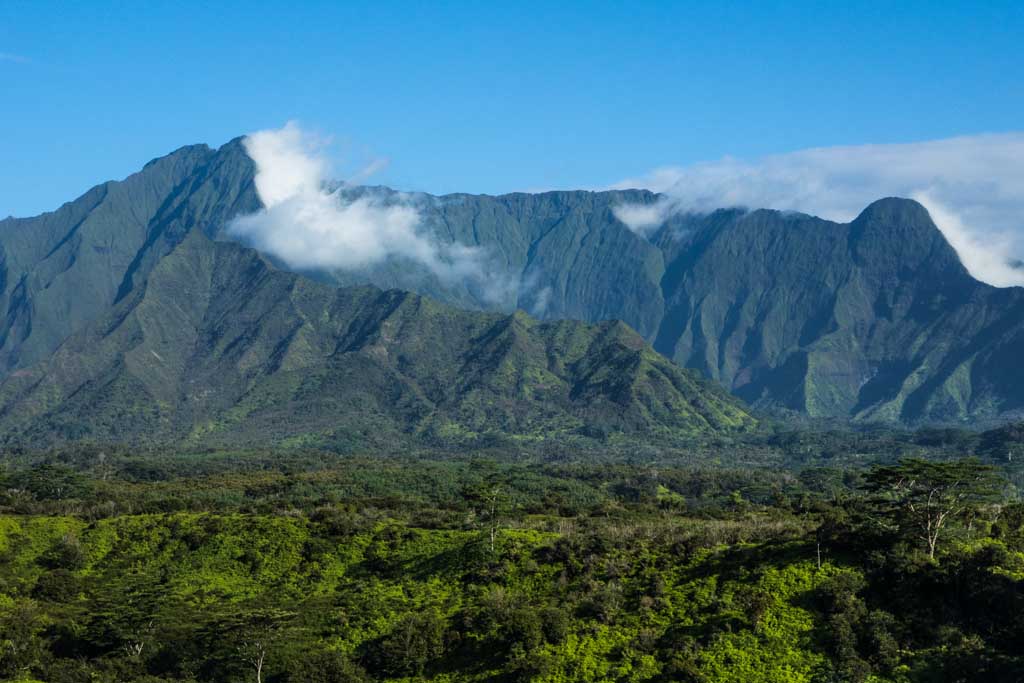 After a bumpy 45 minute tour we found ourselves at an amazing lookout. This view overlooked an amazing valley of jungle which lead up to an old volcano. But it also happens to be one of the places on earth that gets the most rain. I’m not going to lie, when we arrived there the top half was covered in clouds (which is quite normal) but I wanted to showcase this amazing mountain and view for you to see! Kauai is full of epic lookouts and some of the best scenery on the planet! 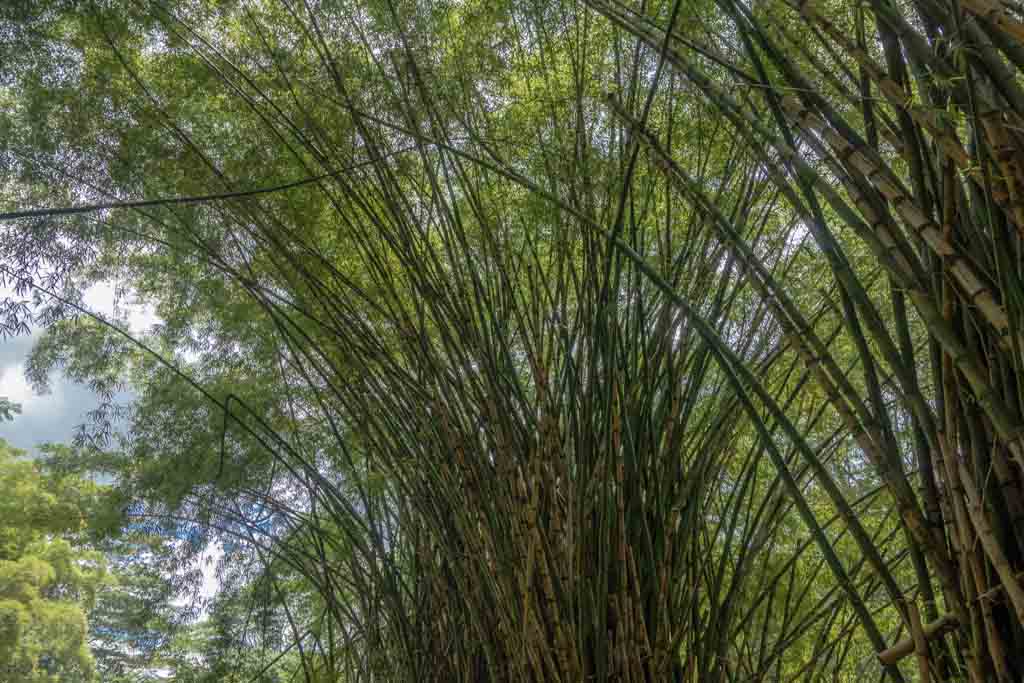 Our next point of interest was a Bamboo forest. The short 5-minute nature walk led us through some of the most incredible bamboo trees that I had ever seen! The most interesting fact that I learned on that tour was that bamboo trees roots are often as big below the surface as the trees are above the ground! 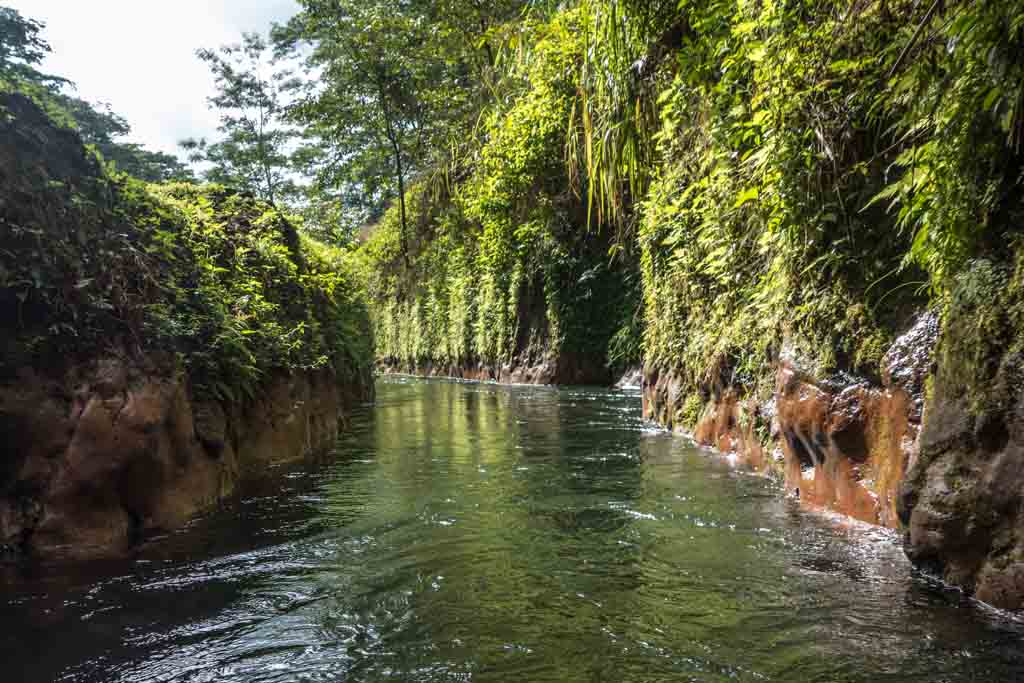 Now that we had our two points of interest behind us and had learned a little bit about the Eco-system we were in, it was time to go through our safety checks and get our tubes! We quickly loaded into our tubes and found ourselves floating among this amazing scenery! 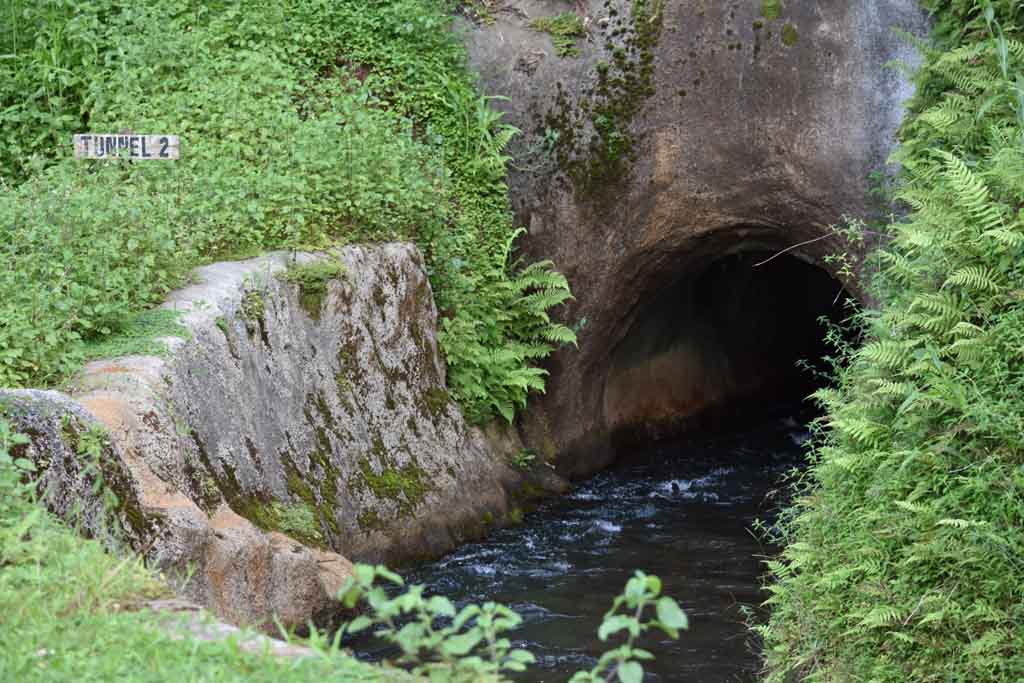 The Kauai tubing guides had a STRICT rule, one that MUST be followed at all times. NO F (or C) words. So when describing the temperature of the water we weren’t allowed to say things like “Freezing”, “Cold” or “Chilly.” We had to replace that bad language with things like, “Refreshing, invigorating, and inspiring.” (The water really wasn’t that cold but the anticipation leading up to it was entertaining!) 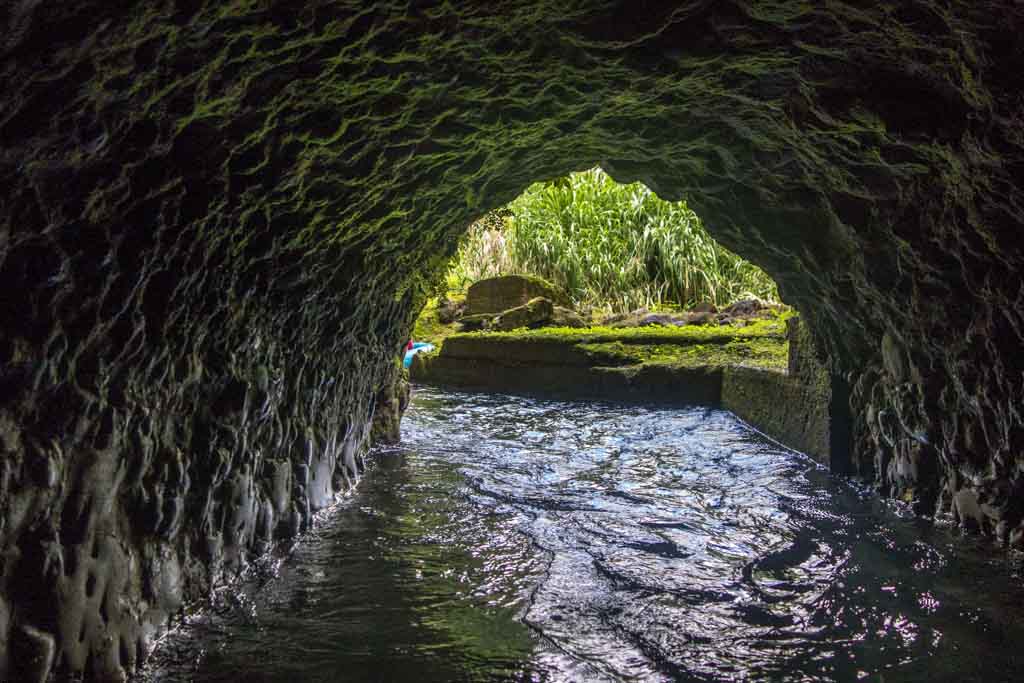 Another strict rule that the Kauai tubing guides had was that you weren’t allowed to bump into someone and say, “I’m sorry”. No, the reality was that we’d be spending the afternoon bumping into each other, so to make it more fun we had to say things like, “Take that” and “Gotcha!”. It made the process of winding down through the tunnels a lot more fun, as we inevitably bumped around and kept moving back and forth between one another! 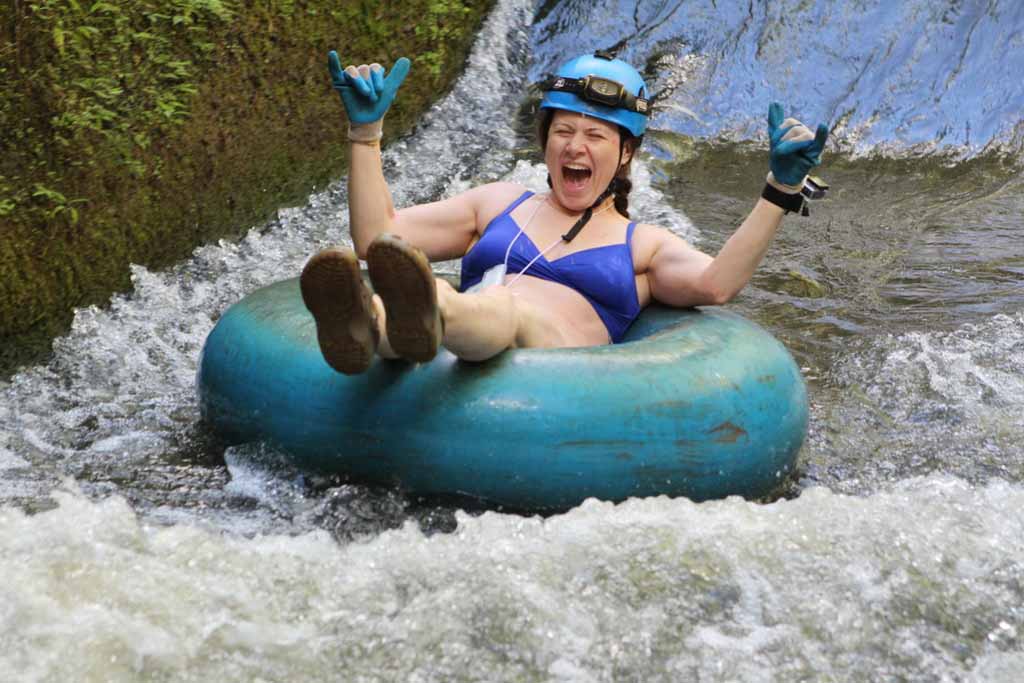 Yes, you read that right. This is a picture of me after I had just come down the HUGE 900 mm waterfall. (For those of you who aren’t good at math, nor feel like doing the calculations, that’s a ginormous three feet!) So maybe it’s not the biggest waterfall you’ve ever been down, but it certainly was fun for us and I loved knowing it was safe for my children to navigate, and even heard them screaming as they had fun!

What would be an adventure like this without my trusty GoPro on my side? If you choose this adventure be sure to have your GoPro attached to you somehow… if you drop it down the irrigation channels you’ll have to send out a search party to get it back!

If you go be sure to bring:

Be ready to get wet!

Is this a sponsored post?: Yes, our Kauai tubing adventure is sponsored. However, we take the responsibility of shared posts VERY seriously and only work with partners we can wholeheartedly recommend and services we would purchase ourselves.

Looking to plan the ultimate family trip to Kauai? Check out our other stories and recommendations: