As I hopped up on my surfboard and began gliding on the perfect green wave, I took a quick glance at my son. His face was beaming with a mix of pride and surprise – watching his mom coast her way towards the golden sand of Australia’s eastern coastline in Byron Bay. And it was at this moment that I realized I was experiencing the absolute best day of my life.

I can’t say I’m surprised. There is something magical in the air in Australia’s Byron Bay – a place where every single day is even more incredible than the last.

Here are all the things to do in Byron Bay with Kids:

All I could think about the second my family and I arrived in Byron Bay was “why didn’t I travel here when I was 20 years old?” From day one, this place felt like the Mecca of my soul. Like it had been specially built just for me, with all my favourite places, experiences, and feelings curated and compiled right on the sand on Australia’s eastern coast.

Byron Bay really has it all. The beaches are some of the most pristine you’ll ever see. Surfing is unlike any other we have experienced. The sea life is incredible, with no shortage of amazing whale, dolphin and fish encounters that’ll make you feel like you were dropped right into the world’s most remarkable aquarium. And there is an incredible mix of high-end bohemian chic fashion, board shops, and fun, quirky restaurants to keep you busy for days on end.

Everywhere I turned, I couldn’t help but smile. Though I never made it here when I was younger, I was determined to make up for the lost time. And thankfully, my family was just as game for adventure!

Discovery Parks offers several different types of lodging options, from simple tent-style camping, all the way up to private family cabins. We opted for a deluxe two-bedroom cabin during our stay, which gave us plenty of space to relax and unwind after a long day of fun. Featuring a modern bathroom and kitchen, along with two spacious bedrooms, this cabin was the perfect place to continue our family bonding on this Australian adventure.

As far as amenities go, Discovery Parks Byron Bay can’t be beaten. Did I mention they have their very own waterpark?! My kids just about died when the heard the news, and our bags had barely been dropped before they were racing towards the slides, fountains, splash pads, and bounce pillow. Talk about the ultimate accommodation perk!

While we could have spent every day enjoying our personal waterpark, we, of course, had to experience the amazing, world-class surfing that attracts adventure seekers from all over the world to Byron Bay.

While my husband and daughter went off on an adventure of their own, my son and I opted to head to the highly recommended Soul Surf School, located in downtown Byron Bay. After being greeted by the super friendly staff, they outfitted us with everything we’d need for our lesson, including wetsuits, rash guards, and a board to match our size and skill level. And with that, we were off with our instructor Terry to the world-famous Tallow Beach.

Since my son and I have taken several surf lessons before, Terry was quick to adapt his training to account for the basic skills we already had on our boards. The lesson of the day focused not so much on the mechanics, but more so on how to find the perfect “green” waves that make for great rides. And once Terry showed us how to identify the perfect surf, my son and I spent the afternoon laughing, smiling, and cruising wave after wave. Quite honestly the most perfect day!

The Iconic Lighthouse in Byron Bay

After our separate daytime adventures, the four of us reconvened that evening and took a stroll to the Cape Byron Lighthouse. Constructed in 1901, this beautiful lighthouse is located right near the edge of Cape Byron, which is the most easterly point on mainland Australia.

The views from the lighthouse were absolutely breathtaking. Not only did we get a panoramic shot of the ocean, but we also got to see some of its most impressive creatures. In a matter of minutes, we counted several dozen humpback whale sightings. It was SO incredible! There were even several babies in the pack, and my family and I sat back and watched as the parents showed the little ones how to swim. The four of us were just left speechless…definitely a scene we will never forget!

Wandering the Shops in Byron Bay

Downtown Byron Bay has the wonderfully relaxed beach vibe one would expect after a day in the surf and on the golden sand. Though don’t be fooled, it’s not all flip flops and tank tops. Byron Bay has a unique, bohemian vibe to it, with plenty of trendy fashion boutiques, hip restaurants, and interesting bars.

However, for this board short loving mom, I did appreciate the great selection of surf shops and casual, beach-themed restaurants. This made it easy for our beach-loving family to throw on t-shirts and shorts over our swimsuits and head straight for a bite to eat once we had our fill of the beach. Definitely the best of both worlds!

As I mentioned, Byron Bay is known for having not just one, but several world-class beaches. In addition to surfing Tallow Beach, our family spent a lot of time walking the sand and swimming the surf of Wategos Beach and Byron Beach, both of which are absolutely incredible.

Byron Beach was especially fun. Not only is it literally right on the edge of Downtown Byron, but it also features a tourist attraction known locally as “The Wreck”. Located out in the shallows, The Wreck is actually the metal remnants of an old ship, reaching up above the waves and into the sky.

While today it is more of a photo-op than anything else, The Wreck still serves as a reminder of the incredibly treacherous journey settlers used to take to get to this magical place, and that we should be thankful for every minute of our holiday.

So Much to Do, So Little Time in Byron Bay

Bryon Bay is a place you could spend weeks visiting and still not do it all. From scuba diving and snorkelling, to park tours, festivals, beach hopping and more, this place really is the ultimate adventure.

Though I never got to visit for an extended stay when I was young, I am so incredibly thankful I had the chance to come here and explore this magical place with my family. Truth be told, it wouldn’t surprise me if years down the line I find myself convincing my kids to return to Byron Bay for an extended study abroad or work visa program. There is just something about this place that changes you for the better. I really don’t know if I’ve ever experienced a destination that has that same transformative power.

While I am excited for the remainder of our Australian adventure, I was sad to leave Byron Bay. Though if I’m being honest, something tells me that this won’t be the last time I see this magical place. Who knows, maybe one day I’ll be returning to visit one of my kids…

A mom can dream!

Check out these other incredible Australian adventures!

Top 10 Things to do on Kangaroo Island 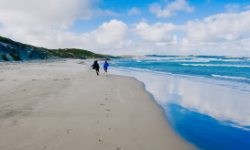 Feeling at Home at Vivonne Bay

The Art of Immersive Adventure

Is this a sponsored post?: No, this article is not sponsored. Our family had a wonderful time here and we wanted to share our experience with our followers.