With a quick pull of the throttle, I shot across the ice, navigating the high-powered sled over the jolting bumps and around the jagged ice peaks. Though I’m decades older now, the feeling was immediately reminiscent of being 12 and racing snowmobiles with my family at British Columbia’s Green Lake. Only this time, instead of seeing my Dad trying to pass me out of the corner of my eye, it was something I’d never quite seen before coming into focus. A white, furry flash… 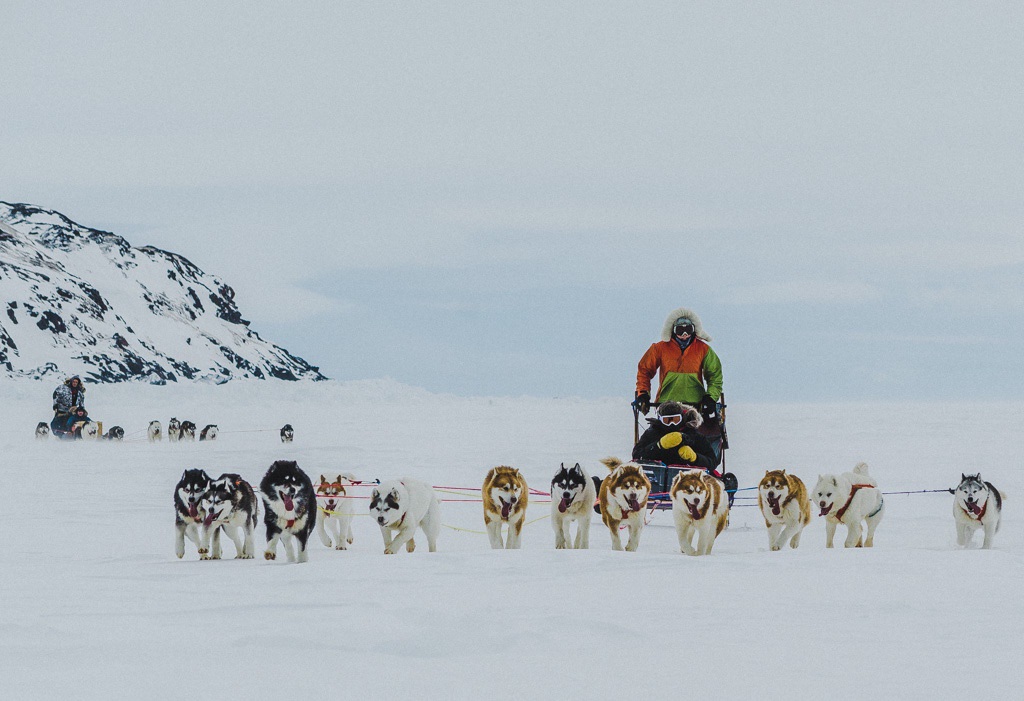 While a typical Friday for me involves getting the kids off the school and catching up on work in front of the computer, I spent this past Friday checking something special off the adventure bucket list: dogsledding across the Arctic with some of the world’s most incredible adventurers. Iqaluit dogsledding tours was like something out of a dream, and one that will forever change my perception of what it means to explore…

My adventure began high up in Canada’s Nunavut province. Here, on the edge of the Arctic Ocean, I met my guide for the journey, Sarah McNair-Landry. A professional expeditioner, and the first woman to be recognized by the International Polar Guides Association as a Master Polar Guide, I can say with certainty that Sarah is one of the fiercest explorers I have ever met. 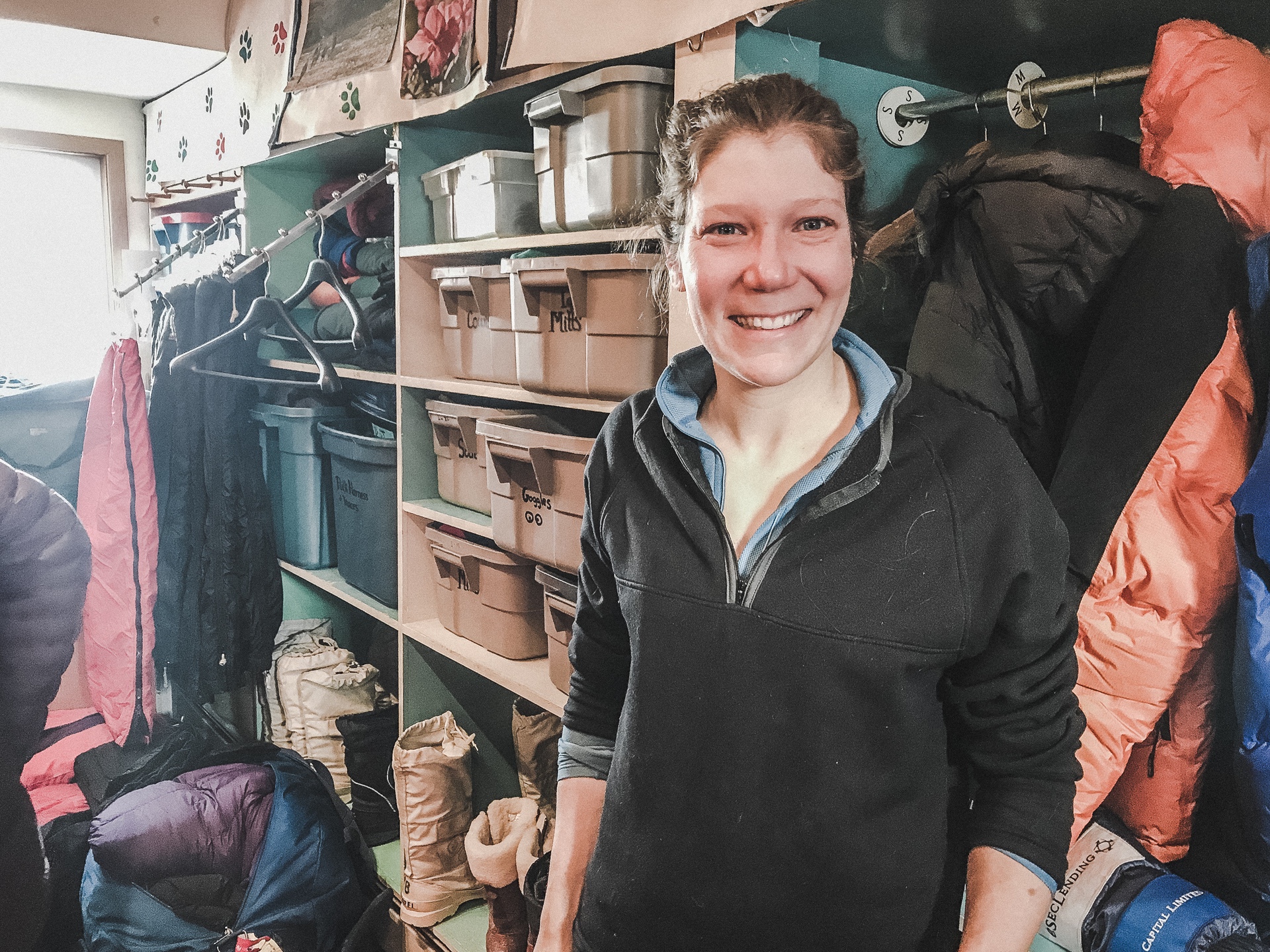 Growing up with the Arctic Ocean and a team of sled dogs in her backyard, Sarah has been exploring the far reaches of this planet her entire life. Now, with her partner Erik Boomer, she runs Northwinds Expeditions, a company with a passion for the cold, offering incredible adventures across the North and South Poles, as well as leading scientific expeditions, film crews, photographers and more. 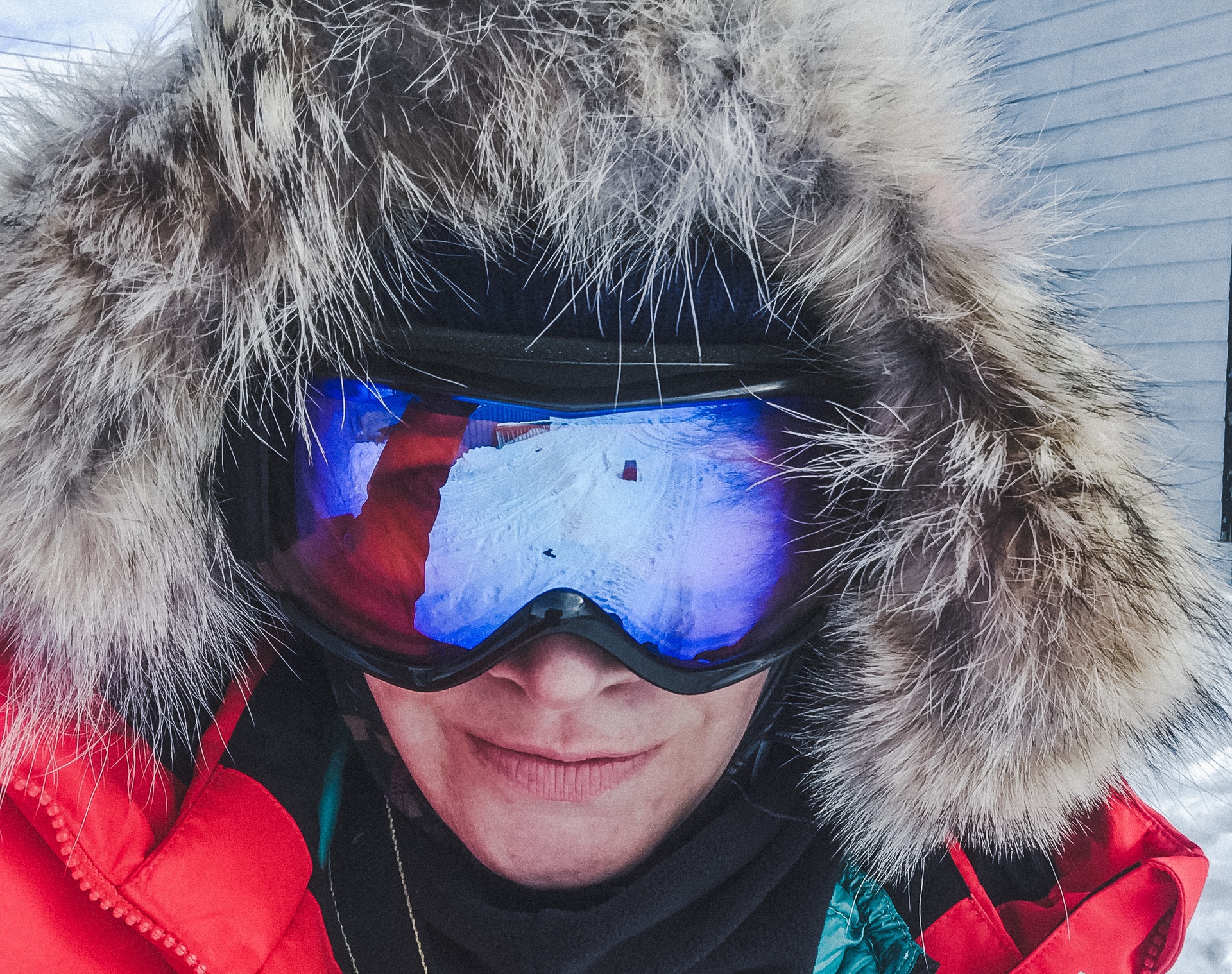 Arriving at Sarah’s House in Nunavut, you are led into the attached Northern Expeditions Gear Room, where your adventure begins. Eyes are immediately drawn to the incredible photographs of adventure lining each wall. Iqaluit dogsledding tours across the Arctic. Kite skiing in Greenland. Driving tractors to the South Pole. Each image gives you a sense of wonder and a shot of adrenaline, knowing that you are mere minutes away from experiencing one of these incredible adventures in person.

One of my main concerns when deciding to take this journey was the idea of having to buy all sorts of specialized gear. Thankfully, Northwinds Expeditions had me (and all their guests) covered. Their Gear Room is filled with all the specialty cold-weather exploration gear you could possibly need, meaning I just needed to show up in my normal ski gear, and they took care of the rest. Special pants, over-boots, over-gloves, over-coats and more, I put on this second suit of cold weather armour and got ready to take on Iqaluit dogsledding tours across the Arctic. 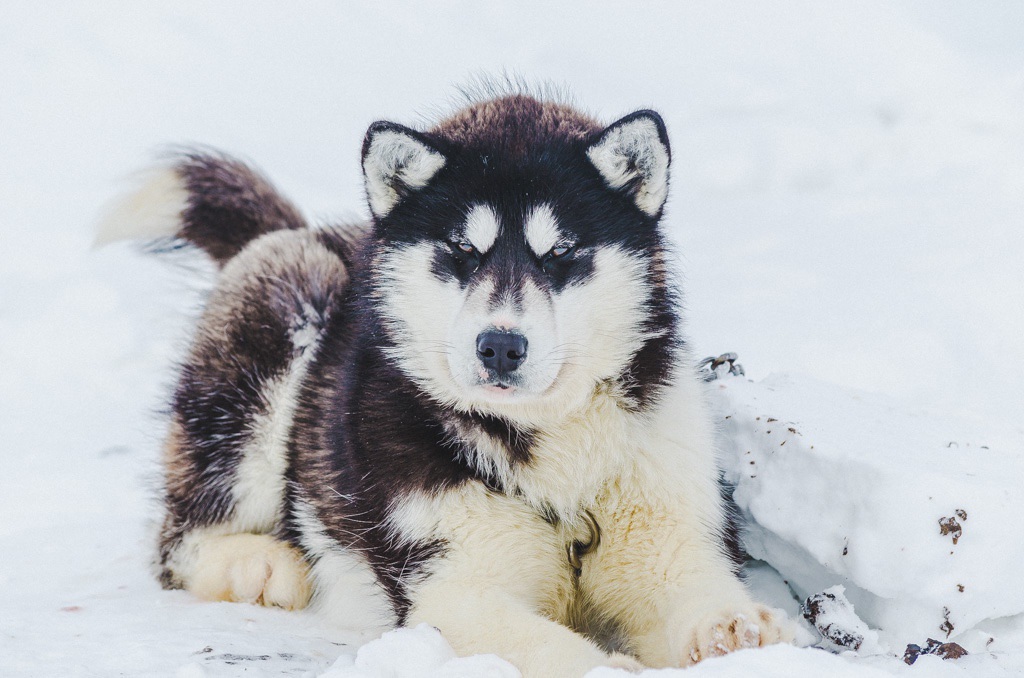 After gearing up, Sarah and Erik led the group through a quick orientation of what we could expect on our dog sledding adventure. We learned about the dogs, the sleds, the conditions and more, ensuring all of us were comfortable with what we were about to experience.

With the size of our particular group, Sarah mentioned that we would be taking turns on the dogsled, with the rest of the group riding alongside on snowmobiles. Asking if any of us were comfortable piloting a snowmobile of their own, my hand immediately shot into their air, as I have been dying to ride again ever since my childhood cruises at Green Lake. With the drivers settled, Sarah and Erik brought out their snowmobiles, attached the Qamutiik – the traditional dog sleds used to carry people and supplies – and we were off to meet the dogs.

As we began our journey over the Arctic ice to meet the dogs at their camp, I couldn’t help but revisit one of the main thoughts I had before coming on this adventure: is this humane for the dogs? Well, my concerns were immediately put to rest the second we came upon the dog camp. These dogs went absolutely wild when we arrived, jumping and howling like they had been waiting all their lives to see us. And much like your dog at home when you bring out the leash, the second Erik pulled out their sled harnesses and the pups knew it was time to run, they couldn’t contain their excitement! 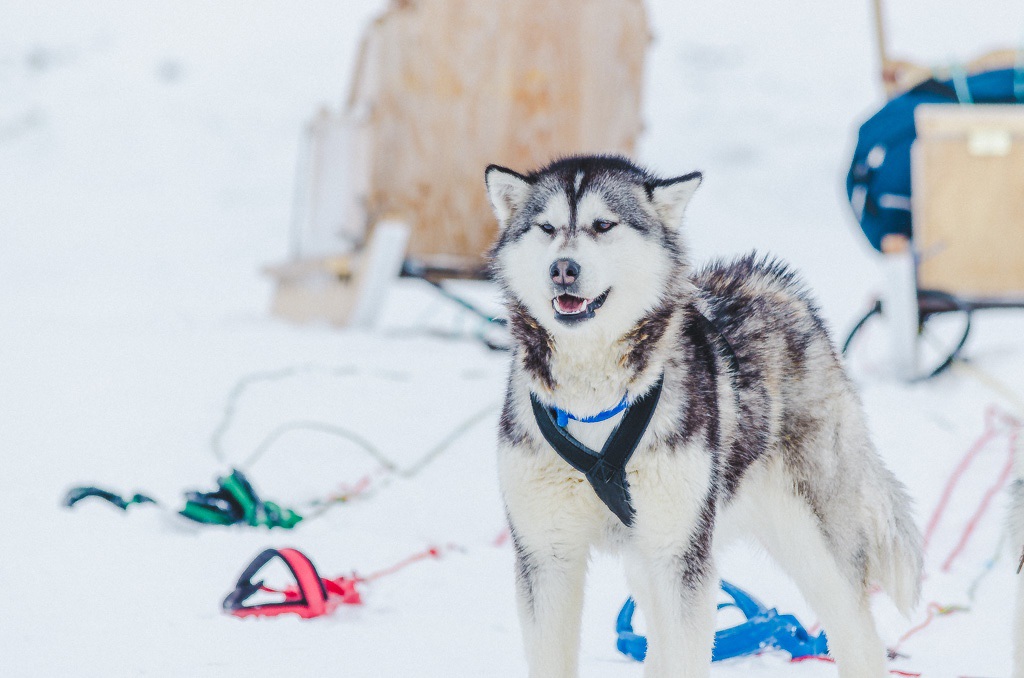 While Erik was harnessing the dogs, Sarah gave us a brief introduction to these beautiful creatures. From a distance, I assumed these were Huskies, but it turns out that these were actually Canadian Inuit dogs, which have been used and bred in the region for thousands of years. Though closely resembling Huskies, Sarah explained the key differences between the breeds, including the most important feature: a denser fur to handle the severe cold of the region. 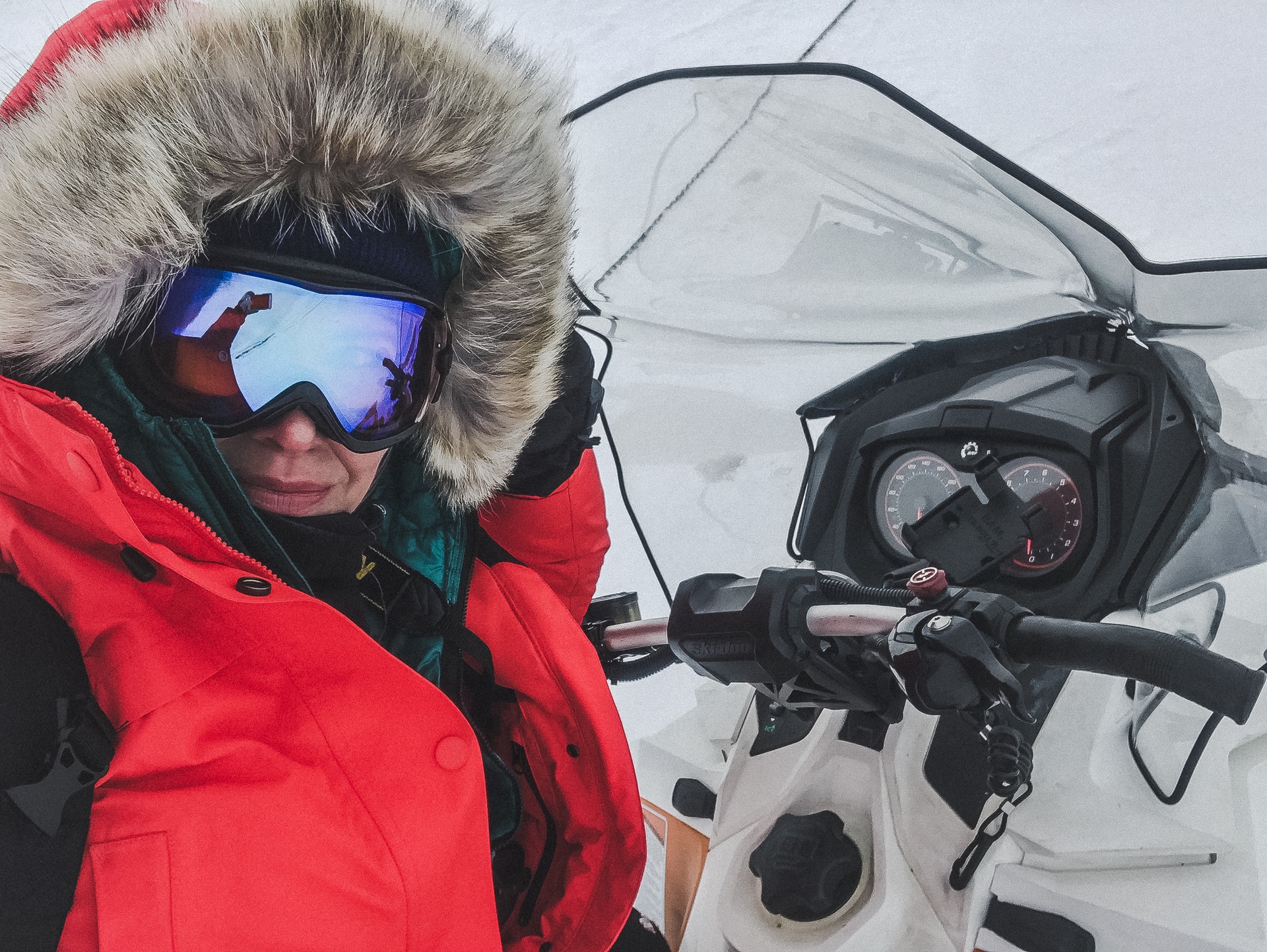 As Erik prepared to harness the last two pups, he looked around and asked the group if we were ready to go. “Of course we are!” we responded. We were excited to get going on this adventure!

While Erik appreciated this enthusiasm, he re-asked his question: “No, are you ready…”. As it turns out, these dogs are so excited to run as a pack, that the second the last one is harnessed, they take off like a rocket.

Message received, the first group of riders hopped into the qamutiik, and I hopped back on my snowmobile ready to tackle the first leg with horsepower instead of dog-power.

Even though Erik and Sarah had prepared us for what was about to happen, I didn’t believe the launch of the sled would be quite as epic as described. Well, little did I know I was I about to eat my words. With the final dog harness attached, the pack took off like a rocket! It was incredible – such a sight to see. I immediately found myself eating their dust, and had to quickly hit the throttle to catch up to the pack. 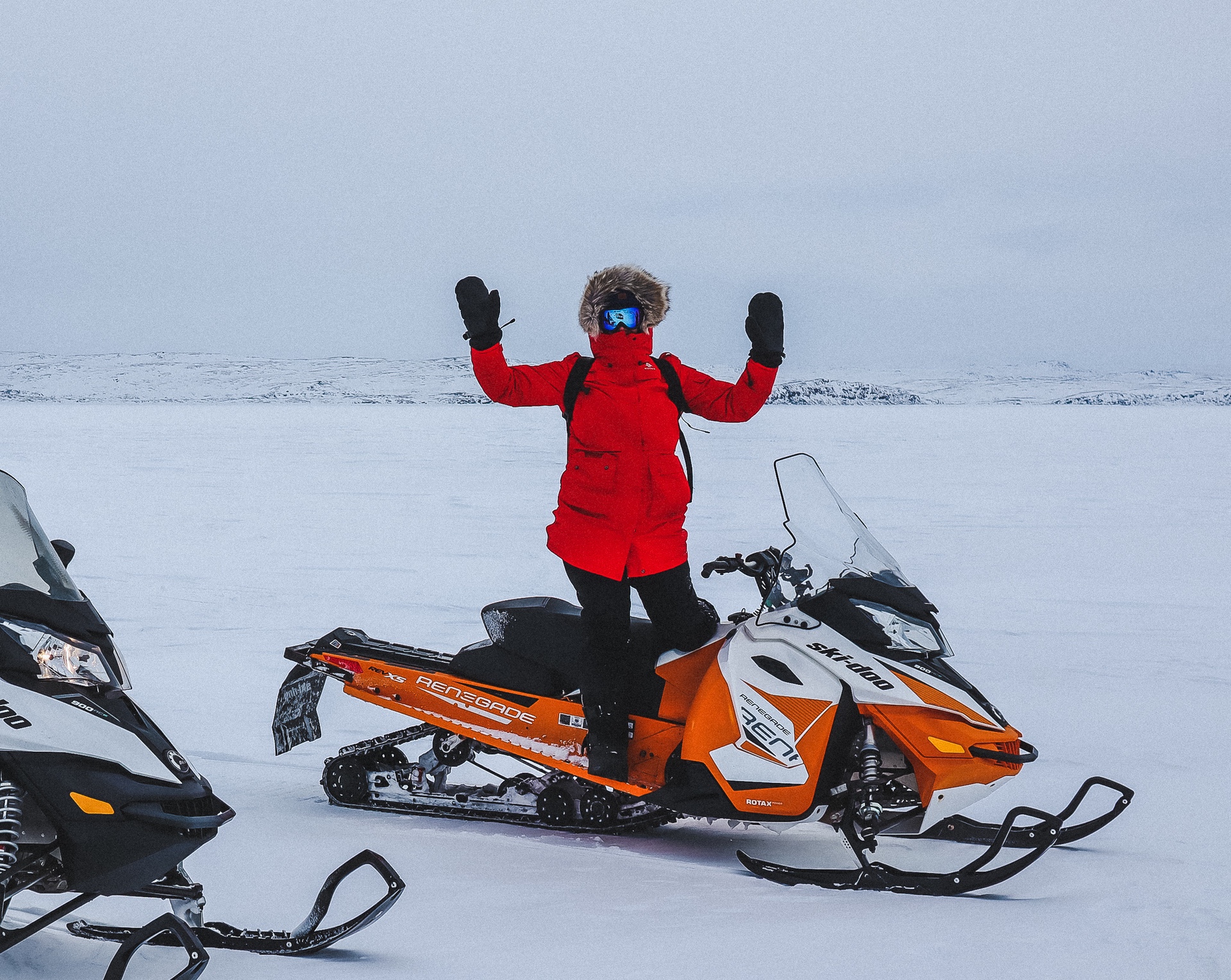 For 45 minutes, we rode hard. It’s difficult to articulate the terrain and the feeling of the frozen Arctic Ocean. It’s everything and nothing, all at once. As we cruised across dense, many feet thick ice – being led by dogs wanting nothing more than to show us their home – you become deeply connected to the environment. Massive ice mounds and snowdrifts dot the surface, and all around you are hit with the rush of the bluest skies and crispest air you’ve ever breathed in your entire life. 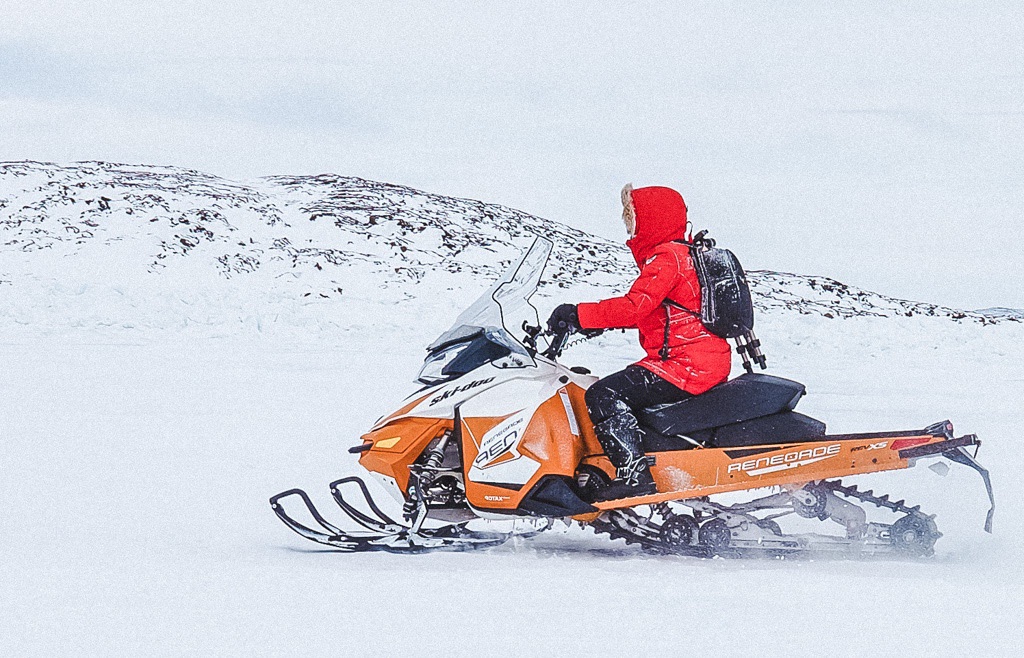 After several kilometres cruising behind the pack, Erik motioned to me that I should speed up to the front, as the dogs love a good chase. I dashed ahead, watching the dogs’ eyes light up (and their legs speed up) as they saw their owners’ familiar snowmobile. I put some distance between myself and the pack so that I could stop and take a photo of the sled approaching. This was the first instance I had to truly appreciate the incredible speed at which these dogs run…by the time I took my photo, they had nearly caught up already! It took a quick burst of acceleration to ensure I wasn’t tackled by the pack and the sled! 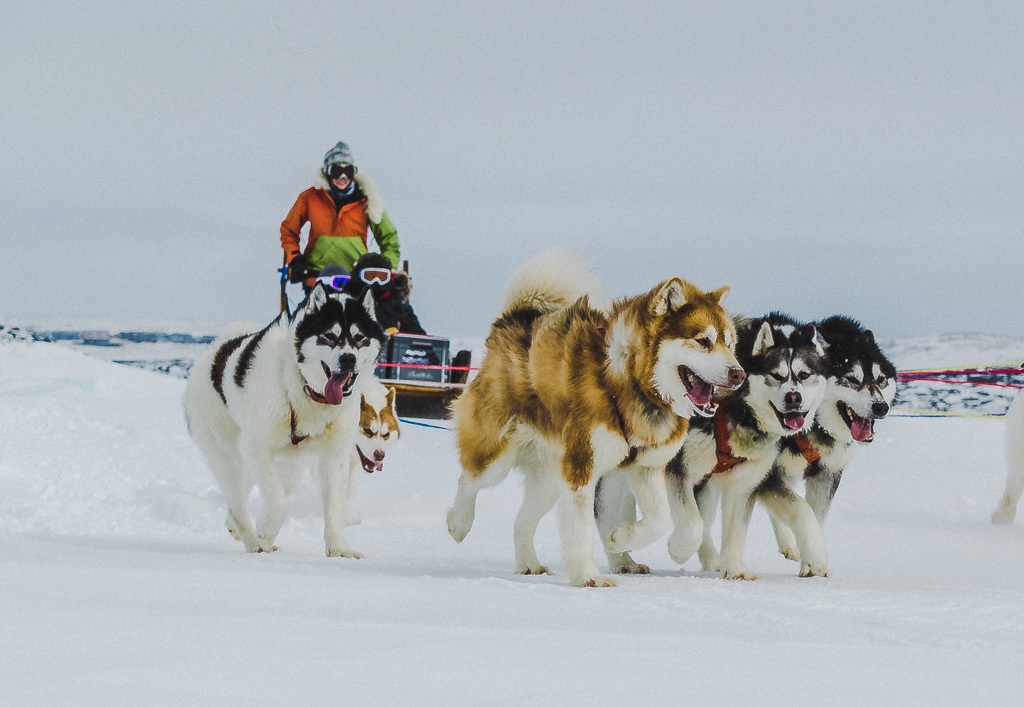 Shortly after, we came together with another one of Northwinds Expeditions’ dogsled groups and took a much-needed break – both for the riders and the dogs! 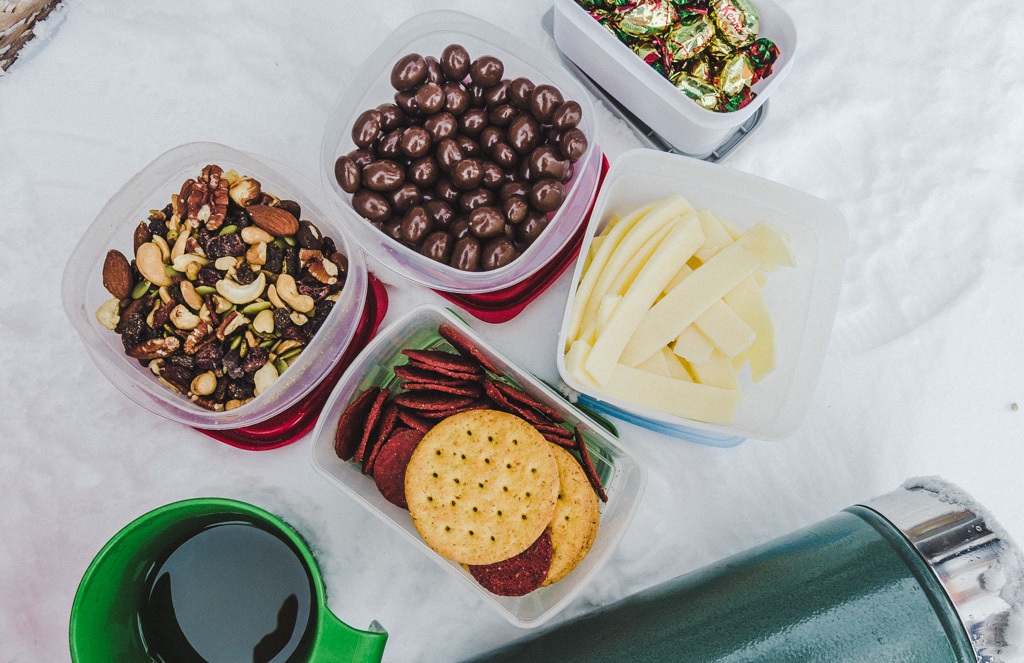 This far into the middle of the Arctic, I would have been happy with a little water and a granola bar. However, Sarah and Erik really pulled out all the stops for this group, providing us with a delicious little picnic of tea and warm apple cider, crackers, cheese, chocolate covered nuts and more. It was such a wonderful break in the middle of nowhere, and the perfect chance for this group of adventurers to pause, take a breath and let it all sink it.

With the break over, it was time to make our way back on the second leg of our journey. Now, it was my chance to abandon the snowmobile and trade it in for the much more traditional way of travel – the dogsled.

Climbing into the front of the sled, I couldn’t help but smirk as I realized I was seeing these dogs from a whole new angle…a rear angle, that is. Settled in, Erik yelled “Mush!”, and we were off once again, flying across the Arctic ice.

Being in the sled was the most incredible experience – equal parts of joy and adrenaline. You develop an immediate connection with the pack of creatures up front, realizing that – to a certain extent – you are at their mercy. That’s not to say these dogs aren’t well trained. Actually, quite the opposite. As Erik yelled “Right!”, the dogs would veer right. Yelling “Left!”, they would do the same. It was at this moment that I fully appreciated just how much these dogs live to serve. While their minds and bodies are in total control of the sled as they guide you across their homeland, their hearts are most definitely with us back there in the basket. 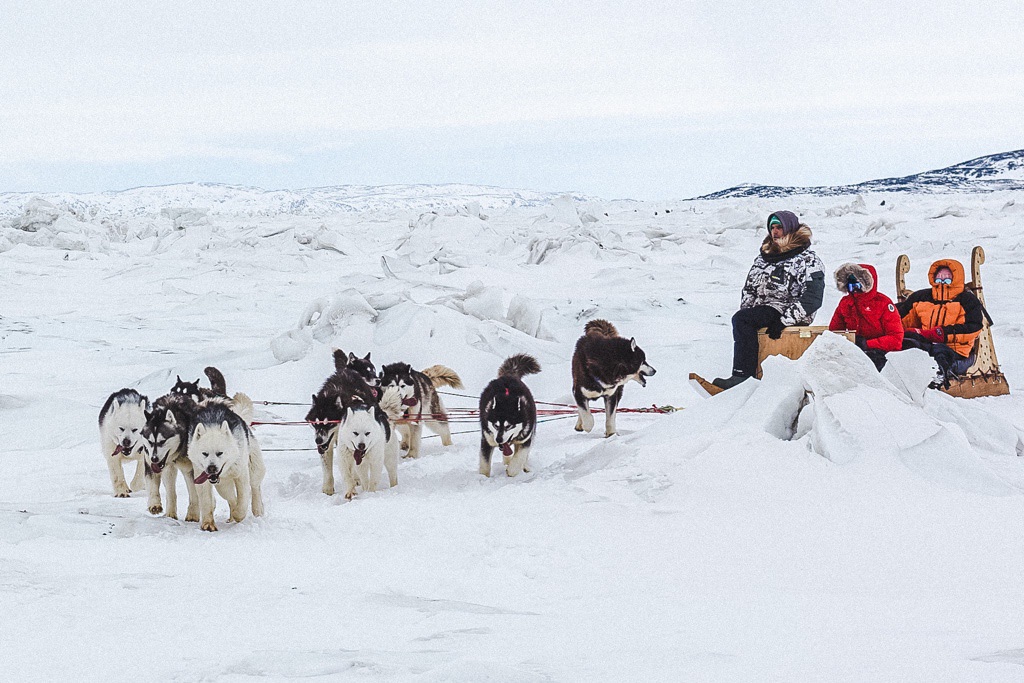 As we approached the camp, the dogs sensed home was near and pushed forward with a final jolt of energy. Racing to a stop where we had begun our journey hours before, I – like everyone in our group – had smiles plastered across our faces. Did we really just dogsled across the Arctic? Was this all a dream?

Thankfully, it was absolutely real. And it was all made possible by Sarah, Erik and the incredible folks at Northwinds Expeditions. Nature, adventure, adrenaline and more, this journey had it all. It truly was a once in a lifetime experience, and one that I would recommend everyone add Iqaluit dogsledding tours across the Arctic to their travel bucket list.

To learn how you can take this same incredible trek across the Arctic, be sure to visit their website.

Check out a video of my adventure:

Inspired by my experience with Iqaluit dogsledding tours? Check out my other Nunavut adventures and learn more about us!

9 Things to Know Before Your Trip to Nunavut

The Rush of Racing Snowmobiles Through the Arctic

Who are the faces behind the blog? Meet the Savages!

Is this a sponsored post?: Yes, while my trip to Nunavut was sponsored, the opinions and views of the Iqaluit dogsledding tours in this article are strictly my own.