From Kennel to King Suite: How a Puppy Took Over a British Columbia Hotel 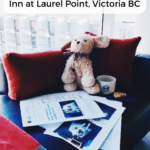 It’s what no parent ever wants to hear…

It was 9 pm, and I was cozy in bed on the verge of falling asleep, when I heard those dreaded words. Our daughter had come racing into our room with tears in her eyes. We had just returned earlier that day from a trip to Victoria, and as we would soon learn, our daughter had left her beloved stuffed puppy (aptly named “Puppy”) behind.

As any parent knows, when your little girl’s favorite belonging goes missing, it’s time to ring the alarm!

I immediately popped out of bed and into full “Momma Bear Mode”. Should we call the hotel? Recheck our luggage? What if he truly was lost…could a replacement be found? Deciding that it’d be best to attack the problem with fresh eyes and minds in the morning, my husband and I reassured our daughter that we were on the case. After finally getting her to sleep, the two of us resolved to be up bright and early to begin the search for our fluffy lost family member.

We both woke at 4:45 am the next morning. While my husband began looking into potential replacements, I emailed the Inn at Laurel Point, which was the hotel we had stayed at in Victoria. By 10 am, they responded. The news was what we dreaded: they couldn’t find him anywhere! They searched our room, the linens, housekeeping, and of course, the hotel’s lost and found. Puppy was nowhere to be found. According to the hotel, he was gone!

Gone? Like “gone” gone? No. It couldn’t be! My heart sank. I immediately began to think through the conversation I was going to have with my daughter when she returned that day from school. How could I possibly tell her that Puppy was gone forever?

I just couldn’t believe it was true. Poor Puppy! Way too upset to work, my mind was racing trying to come up with a solution. I was feeling so helpless…that is until I heard the ding of my computer. It was another email from the hotel. With my heart beating out of my chest, I opened up the email, praying for a miracle…

Sure enough, after some further investigation, Puppy had finally been found! Having gotten mixed up with the hotel laundry, he had accidentally been sent offsite to their laundry facilities. I blew a sigh of relief! Even though Puppy had taken a journey, the hotel assured me that he’d be making his way back to us soon. Everything was going to be ok!

Now little did I know this was just the beginning of Puppy’s adventure. The fact that he had been found and was going to be returned safely was a miracle in and of itself. But what happened next was truly amazing…

Later that day, the hotel emailed yet again to let us know that Puppy was safely back from the laundry facility. Here is the message we received:

“After returning back to the Inn at Laurel Point, Puppy wasn’t stuck in a mailbag awaiting pick up. No, Puppy was brought on for the day as an honorary staff member, where he got to take part in all sorts of amazing adventures…”

It turned out that while staying behind in Victoria for a few extra days, Puppy had been put on a crazy adventure of his own by the hotel staff! 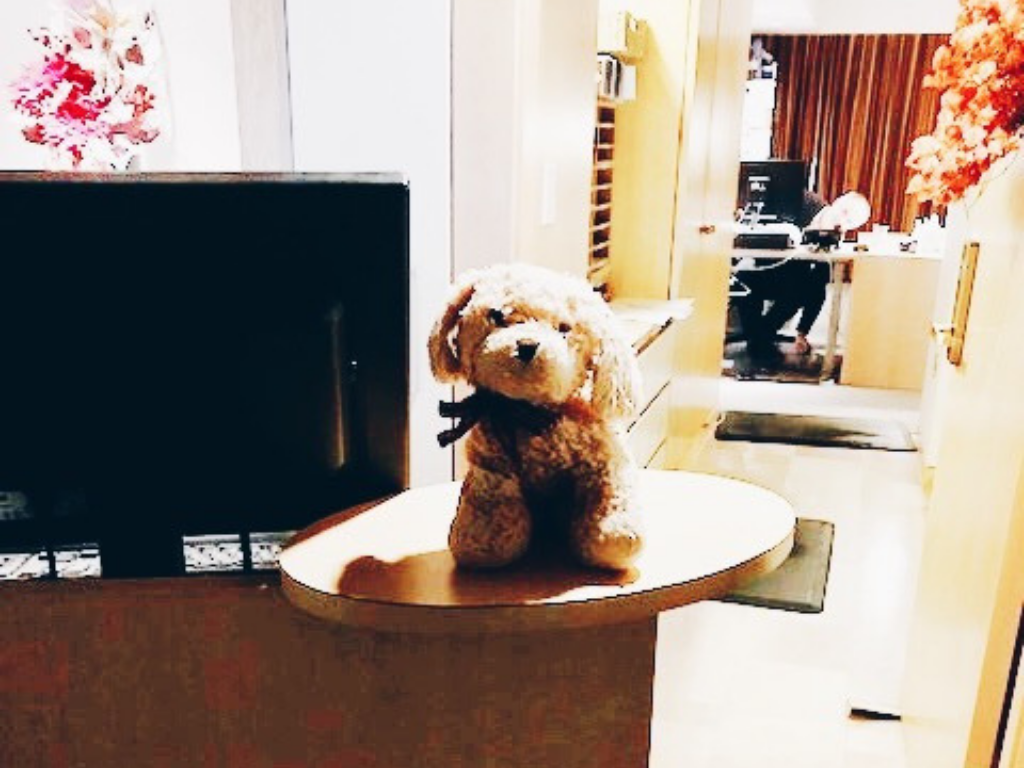 Puppy was put to work as an official greeter at the front desk. Not surprisingly, many of the young guests thought he was pretty cute and cuddly (which, as our daughter can confirm, is quite true). However, Puppy was quick to remind these kids that while he was very happy to meet them, he was only there for a short stay, as he had a little girl waiting for him at home! 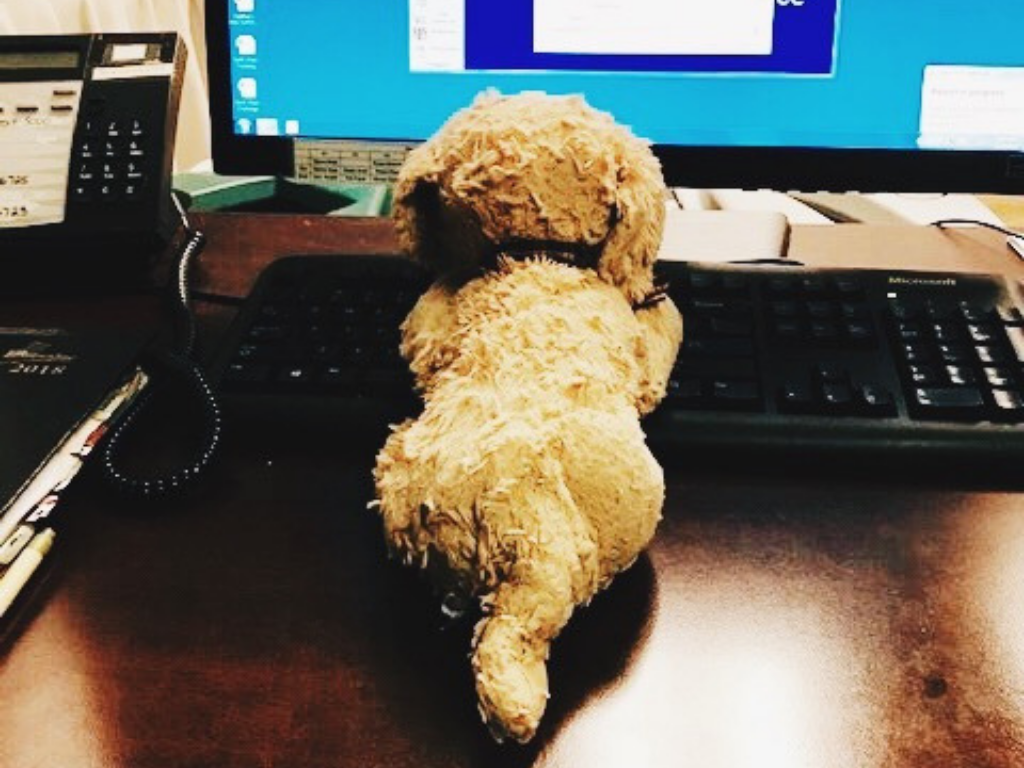 More than a cute face, Puppy got to work getting guests checked into their hotel rooms as quickly as possible. His favourite guests were the four-legged kind, who kept asking Puppy to go on walks and play with them. While the offer was tempting, Puppy knew it best to stay close to the staff, so they could assure his safe return home…a puppy can only have so many adventures in one day!

Phew – it’s been a busy morning. Time for a break! 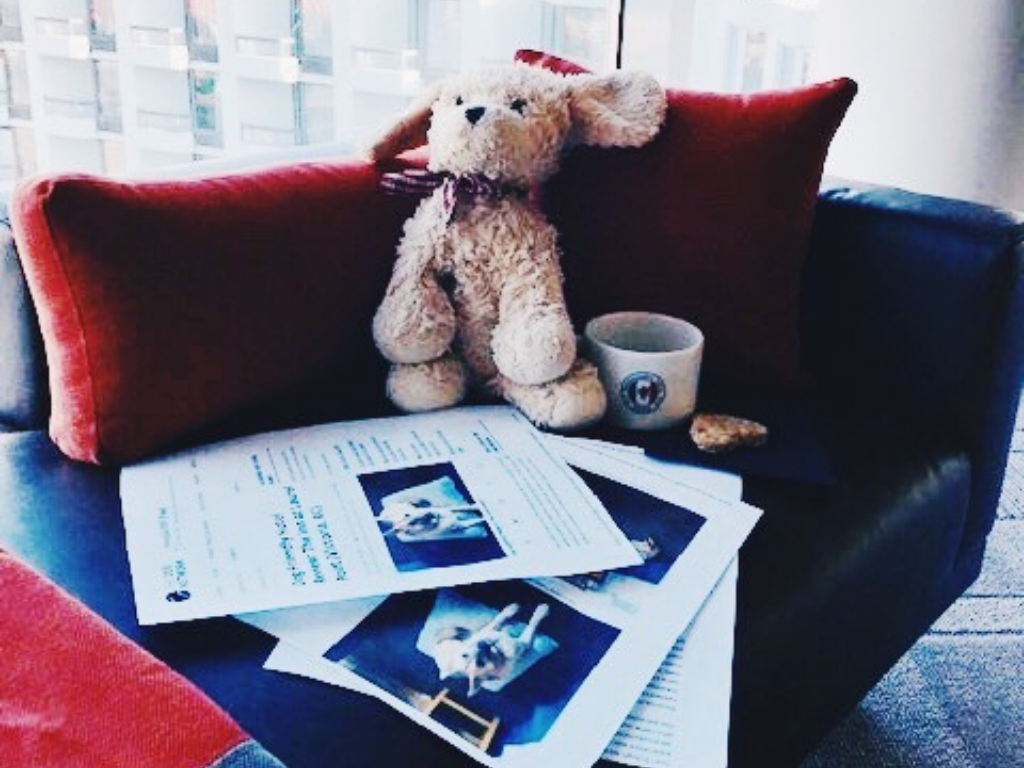 After his busy morning, Puppy found a quiet corner to relax and take in the breathtaking views of Victoria. Not a bad day so far for this pup…

Puppy in the Kitchen 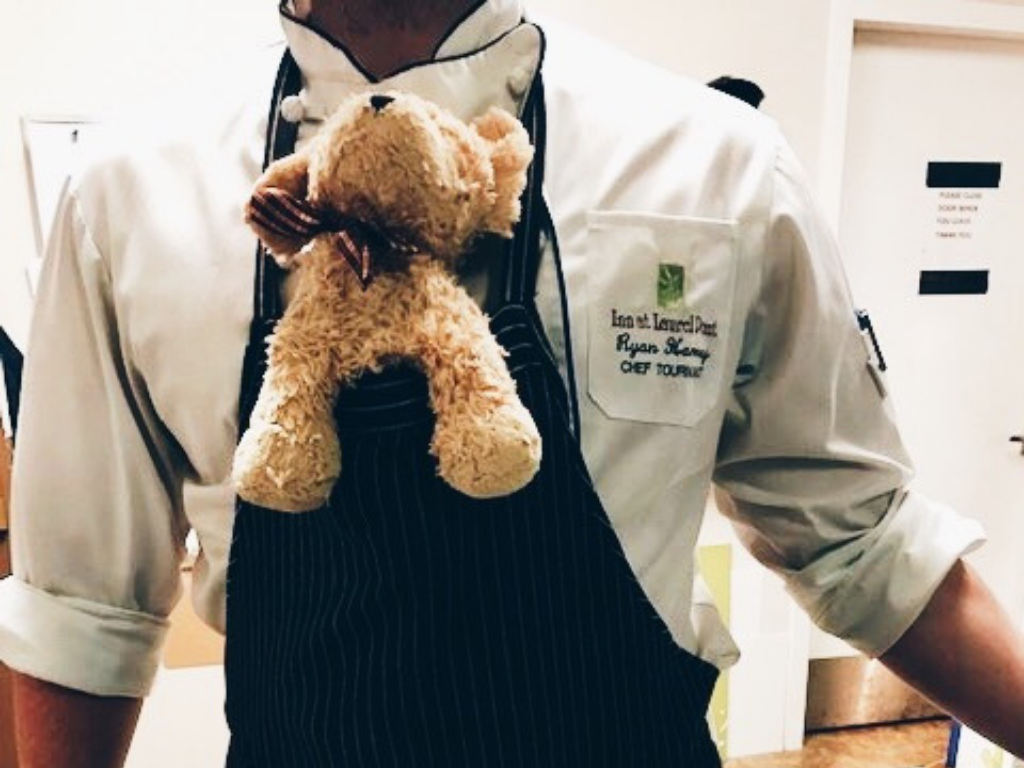 Like all dogs, Puppy loves to eat, so he was right at home in the hotel’s kitchen. Safely secured in Chef’s apron, Puppy had the best view in the house, watching this skilled Chef make all sorts of really fancy meals. He’s certainly never seen these types of meals in the house he lives in! 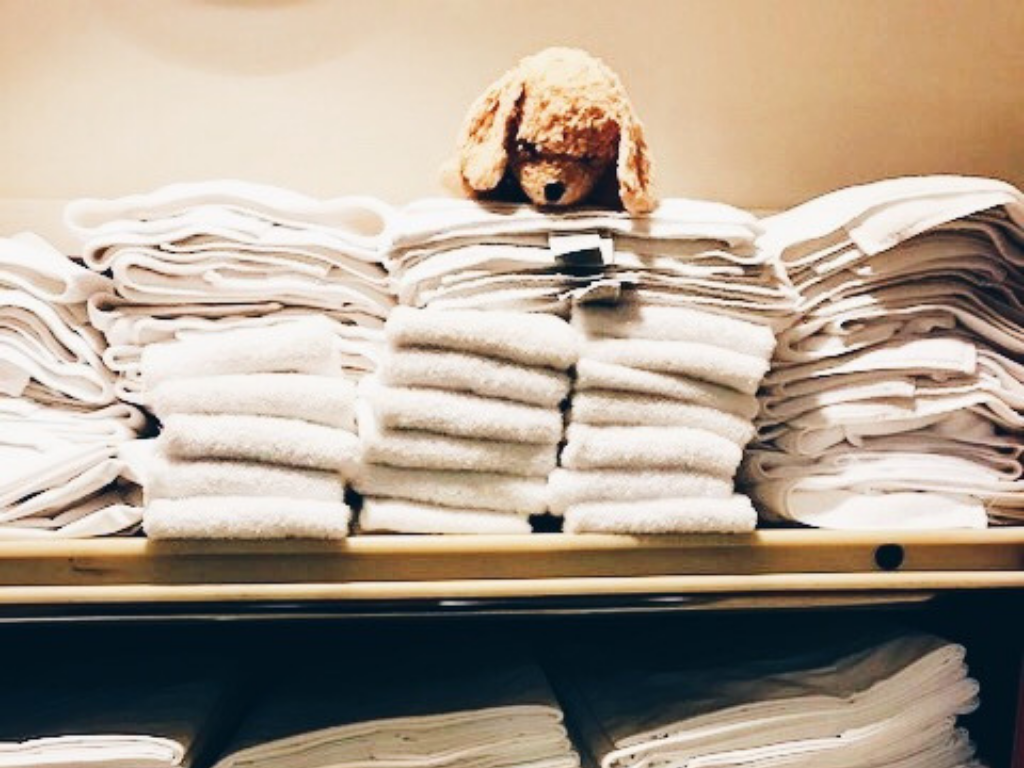 Puppy couldn’t believe all the blankets, sheets, and towels that housekeeping had to sort through! And while he tried his hardest, folding with short fluffy arms wasn’t an easy task, so he asked to head off to another department in the hotel to see if he could be of more help! 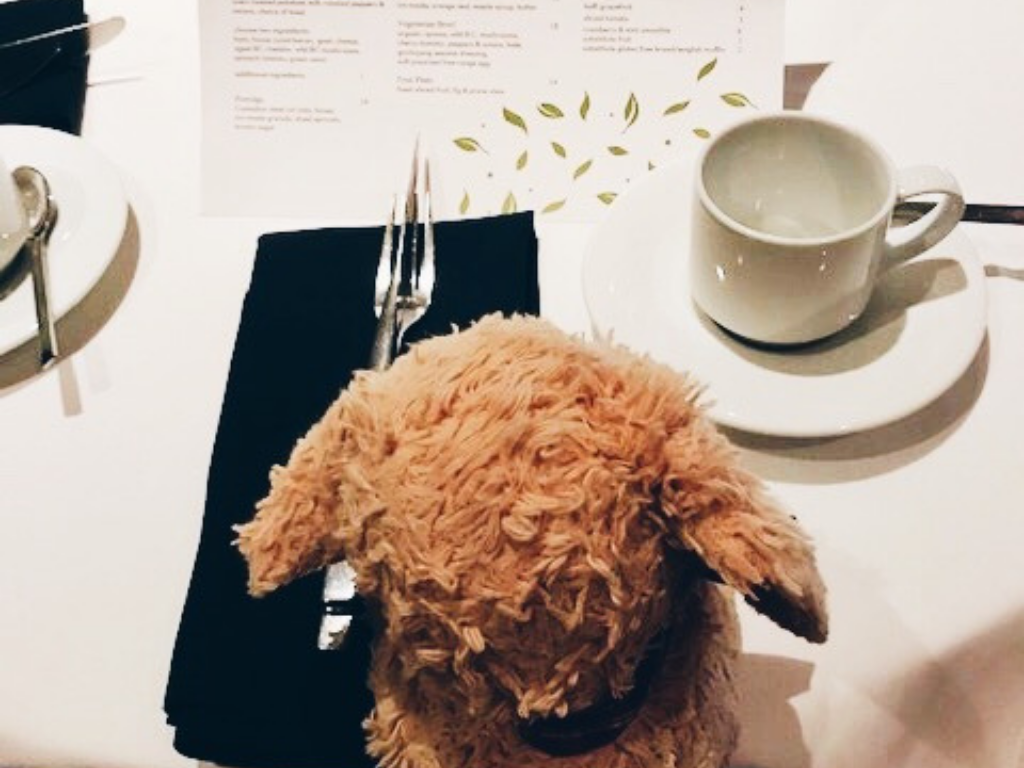 Dogs aren’t normally allowed in the Dining Room, but since Puppy had put in such a great day of work, the staff graciously allowed him to sit down and refuel on the delicious food he helped prepare earlier that day. While Puppy was quite confused at the lack of dog treats on the menu – not to mention the fact that the lack of thumbs made using a fork and knife near impossible – he greatly enjoyed the experience nonetheless! 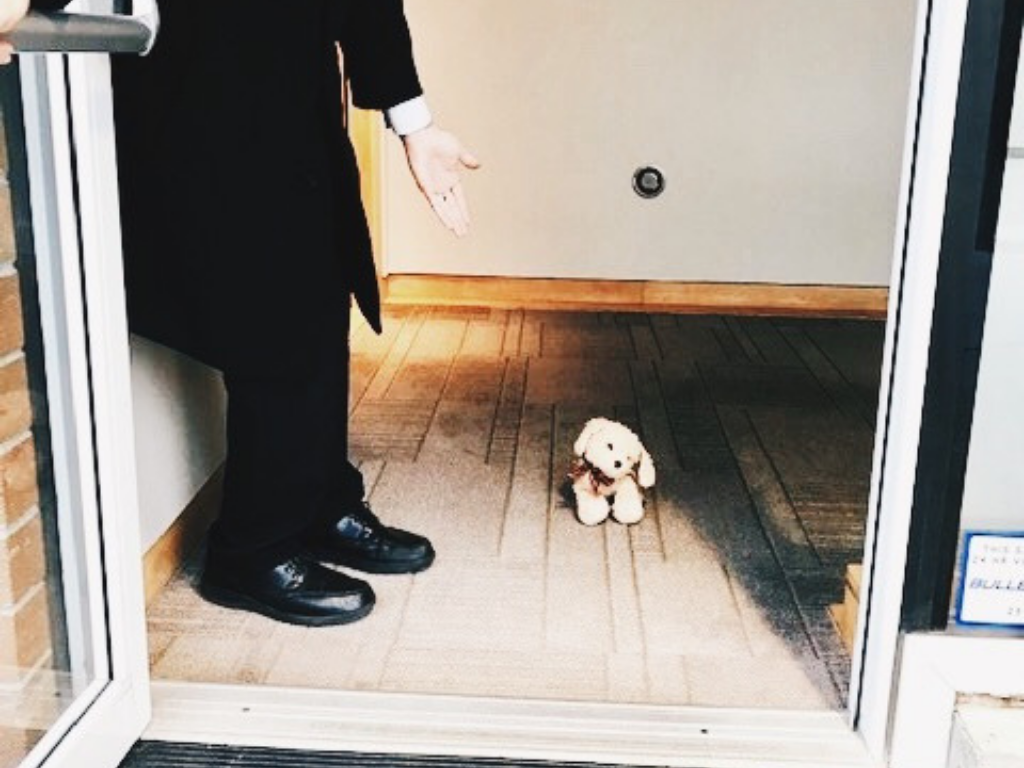 After his tasty meal, Puppy bid one last goodbye to the Inn at Laurel Point team, and was off on his next adventure: a trip in the mail back to home!

Our daughter was ecstatic when Puppy finally arrived back into her arms after his own grand adventure!

A Mom’s sincerest thanks 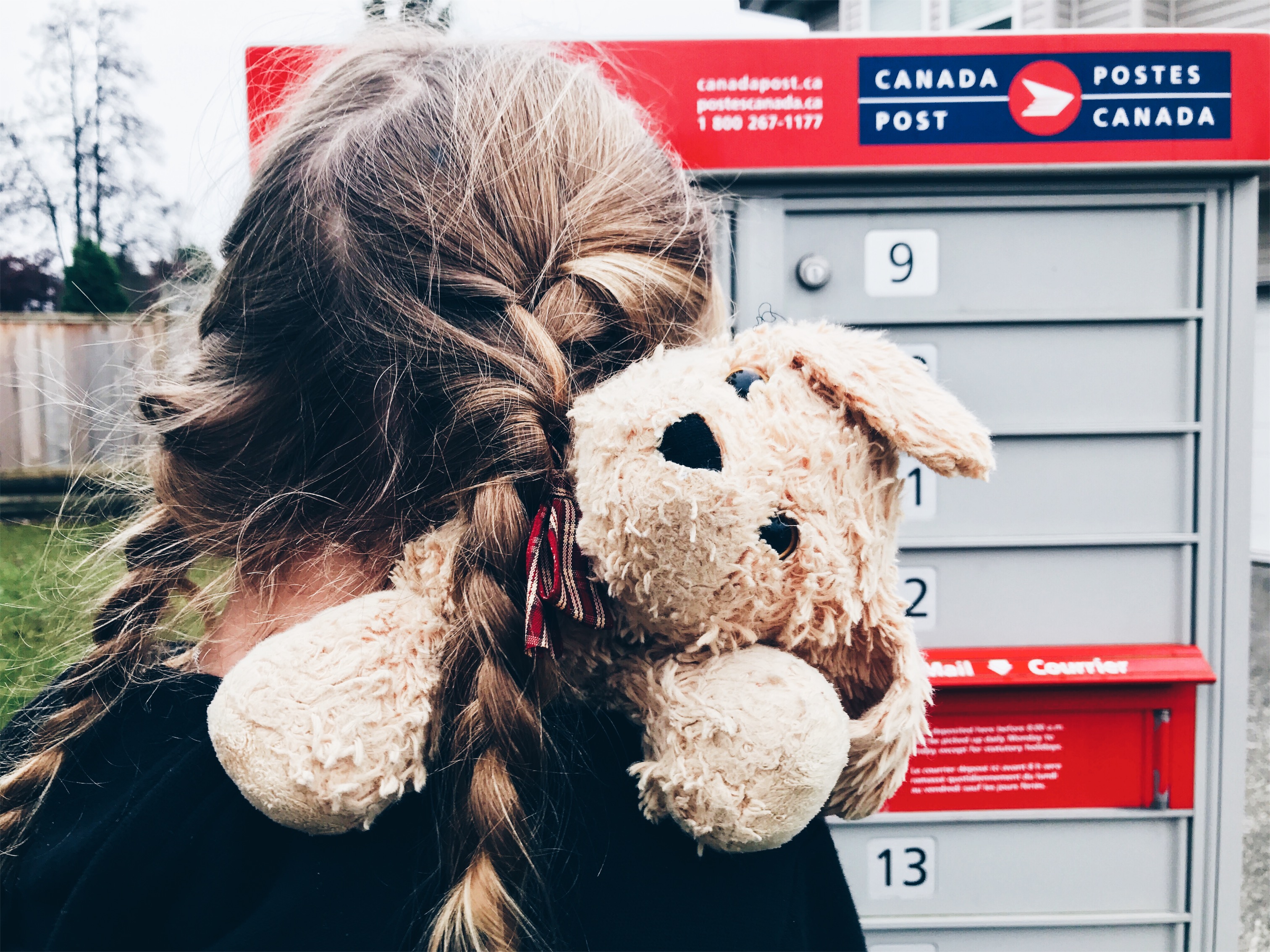 While our trip to the Inn at Laurel Point had already been amazing, Puppy’s extended adventure with the hotel staff made this the most memorable family vacation of all.

As a Mom, I cannot begin to express the gratitude I feel for the entire team at the Inn at Laurel Point. Not only did they go to great lengths to find Puppy (which of course would have been more than enough), but they took the time and effort to create a special moment for my daughter. Seeing her face light up at the story of Puppy’s adventures was incredible. It was a moment I’ll never forget, and one for which I will always be thankful.

About the Inn at Laurel Point

As you can probably tell, the Inn at Laurel Point is a special place. But even before they took our beloved Puppy on an adventure, the hotel had a special place in our hearts. When I graduated from Royal Roads University, the Inn at Laurel Point was where we celebrated. I still remember waking up in the glorious king size bed overlooking the Victoria Harbour with my fiancé. Like Puppy’s adventure, it was another moment at the hotel that I will never forget.

The Inn at Laurel Point is currently undergoing a major renovation, and our entire family (Puppy included) is already asking to go back and see the new and improved hotel once it’s done. This time though, we’ll be sure to keep Puppy on a leash…

We absolutely love spending time on Vancouver Island. Here are some articles to help you plan your next vacation there!

Is this a sponsored post?: No, but my family and I were blown away by the kindness and thoughtfulness that the whole Inn at Laurel Point team extended to us, that we couldn’t wait to share this touching story with all of our followers! 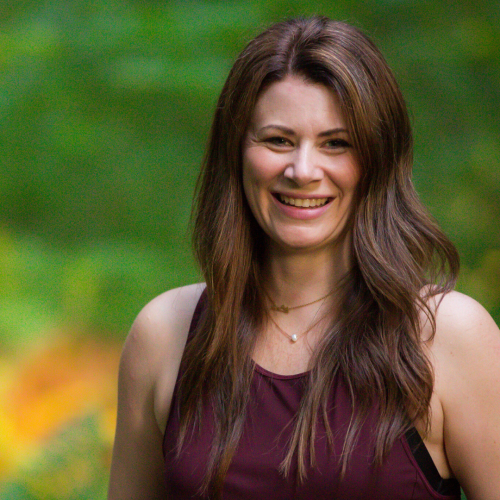 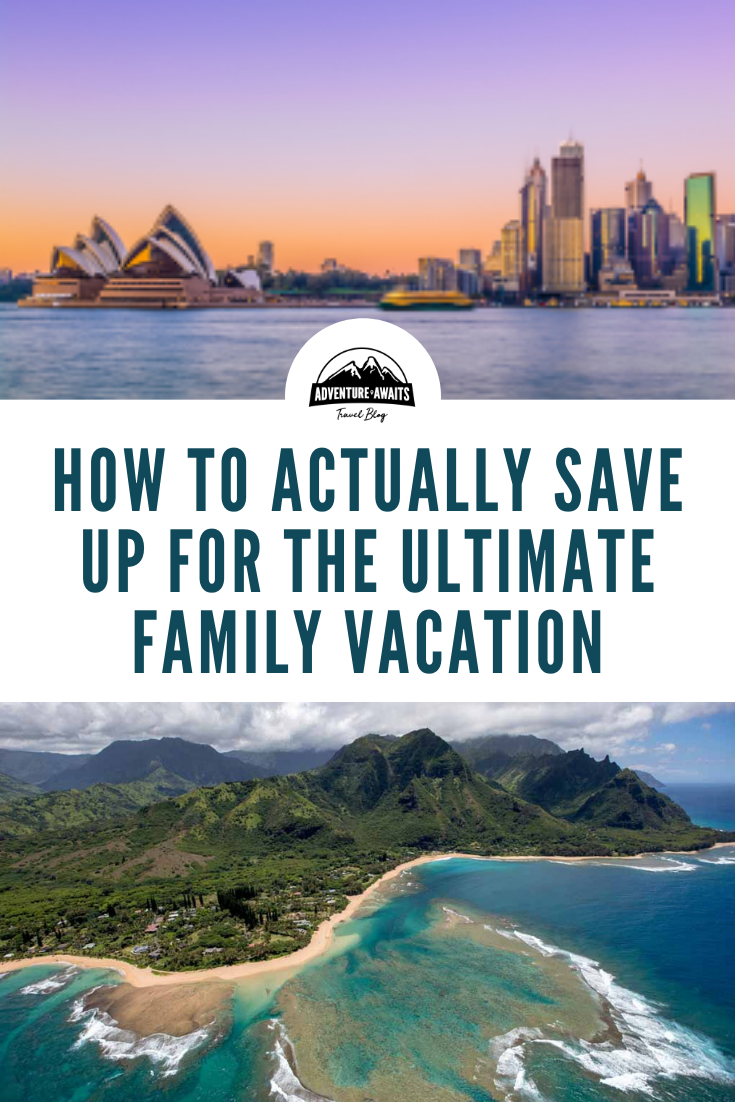 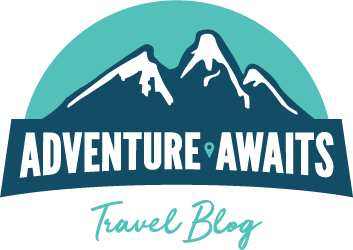