Harness That Summer Feeling with these 12 Backyard Games

Harness That Summer Feeling with these 12 Backyard Games

Who doesn’t love that summer feeling? While the logistics of the season may change with each stage of life—when schedules, priorities and lifestyles all shift—there is a feeling to summer that doesn’t age. A feeling that comes from stretched-out days, warm nights and simple pleasures of the season. Meals shared on patios, moms appearing with popsicles from the freezer, conversation that lasts long into the evenings and a pull of productivity that’s easier to ignore because—in summer—we replenish our souls.

This summer presents another summer of change. As we move cautiously into our adventures, we want to be intentional in our choices but still, use the season to rejuvenate ourselves. We have a unique opportunity to scale back the extras and strip life down to the things that heighten that summer feeling. And what better way to harness the barefoot-in-the-grass simplicity of summer than backyard lawn games.

Whether you’re staying close to home this summer or hitting the road and need something to liven up your campsite or rental property, backyard lawn games are the perfect thing to keep everyone entertained. Keep it friendly or bring out your competitive edge—either way, you will have a lot of laughs with a game sprawled out on the grass in front of you.

You know these games. These are the old-school games you, your parents and your parents’ parents all played as kids. They stand the test of time and are the perfect throwback to summers past. 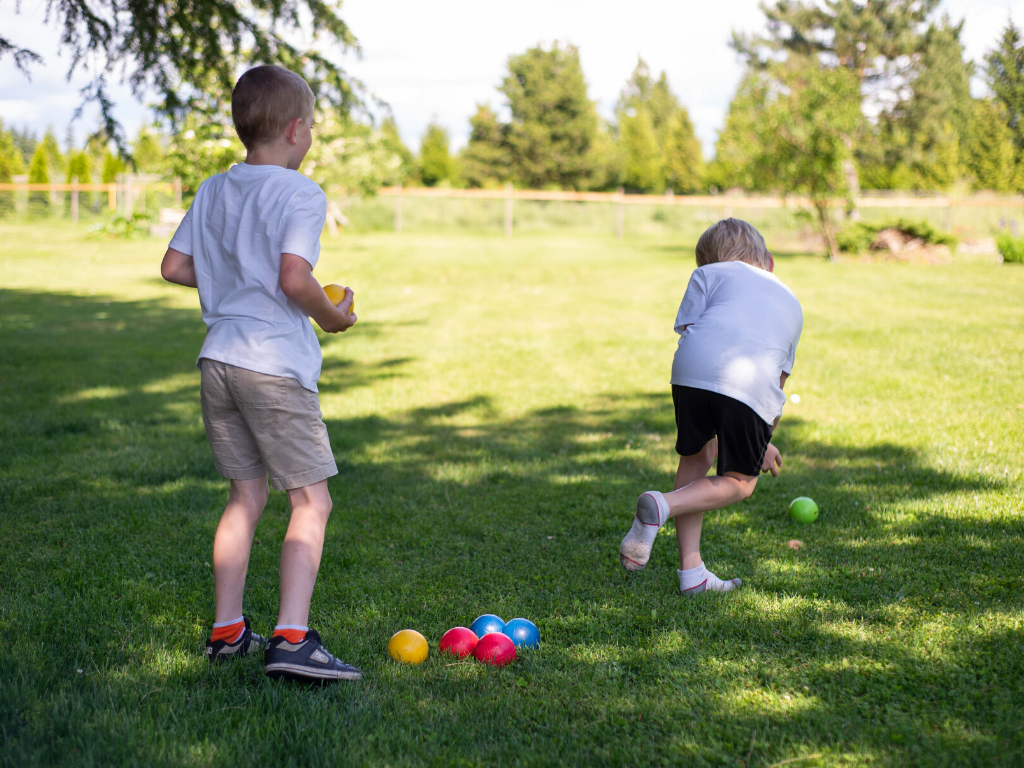 Bocce Ball - The game in its current form comes straight from Italy. Two to eight players take turns “bowling” their coloured balls toward the smaller white ball, aiming to be the closest. Play multiple rounds until one team reaches 16 points. Remember, the balls are heavy so watch the little ones and hope nobody ends up with a sore toe! 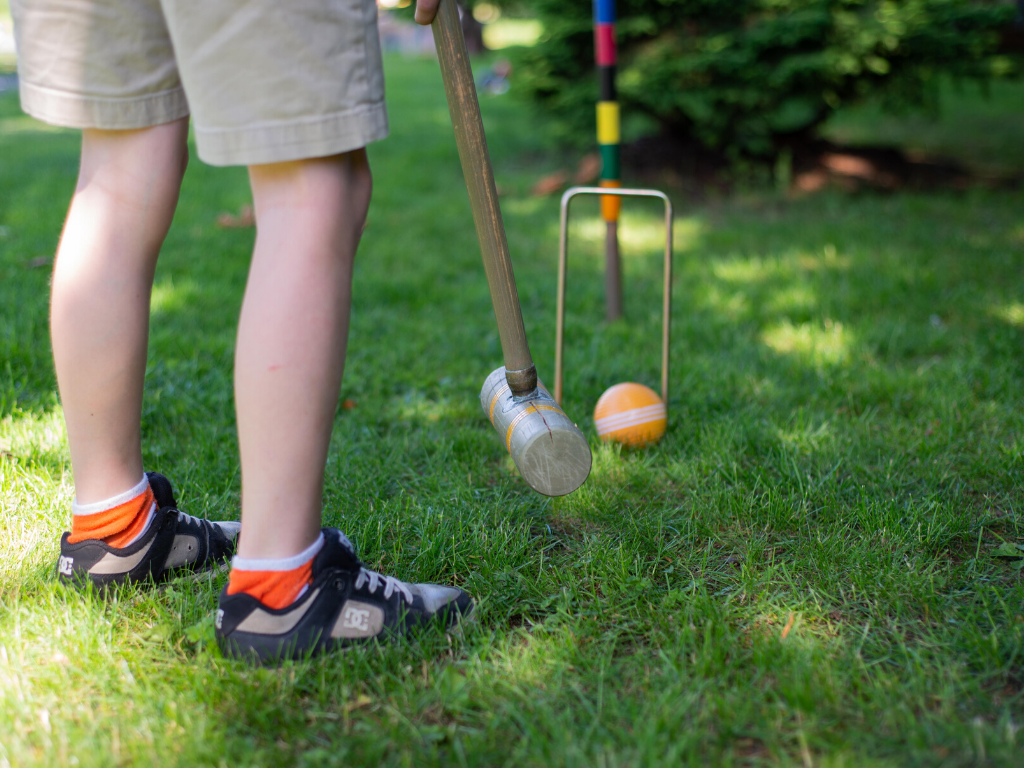 Croquet - People have been playing croquet since the mid 19th century but your kids might know it best from Alice in Wonderland. The premise is simple: hit your ball through a course of wire hoops in the correct order before hitting the wooden peg at the end. Then turn around and go back the way you came. First player back to the start wins.

Play with up to six people and let the kids have fun creating different courses each time you play. 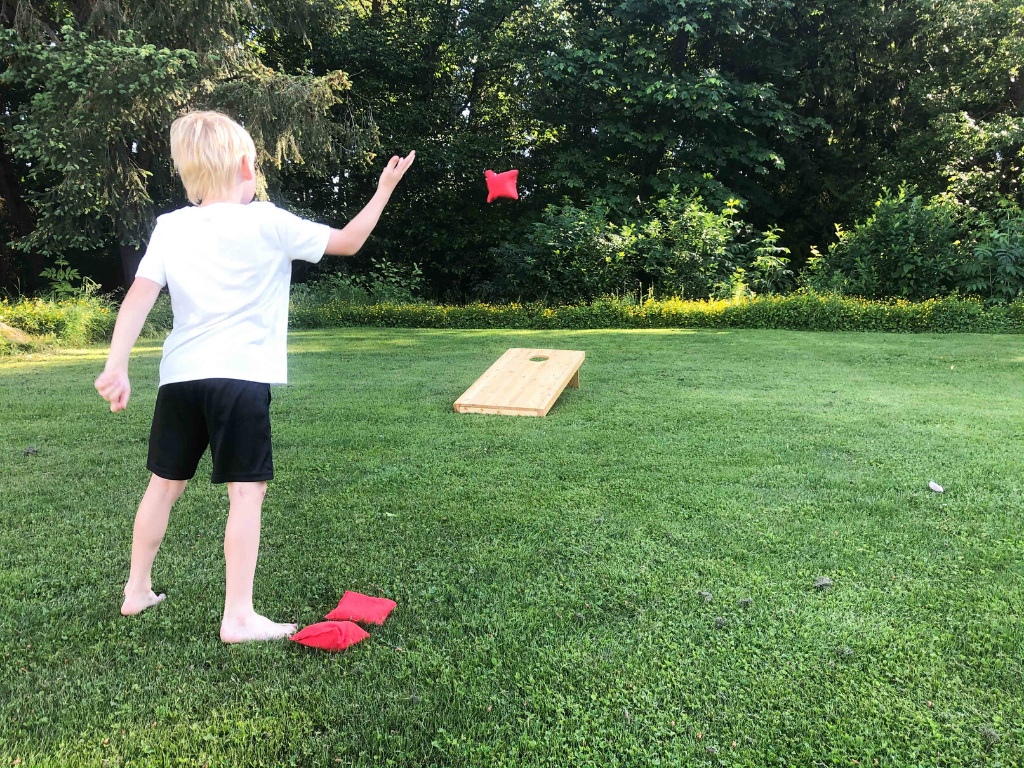 Cornhole - Simply put, cornhole is about tossing bean bags into a hole in the middle of a wooden board. Made for two to eight players, points are scored when a bean bag lands on the board and when it goes through the hole. If you know your way around a tool bench, you could make your own game, or there are many versions available to buy.

Fun fact: Early versions of this game used bags of corn kernels instead of bean bags. Hence the name.

A somewhat new phenomenon is the supersized game. They are perfect for bringing your favourite family game night games outdoors. Many are available online from home-based business so it’s a great opportunity to support local! Or tackle it yourself as a DIY project.

Mom tip: While the larger-than-life games are fun, they are sometimes awkward to store. Make sure you have the storage space before investing.

Yardzee - Just like Yahtzee but your dice won’t get lost in the grass. With giant dice and large—often dry-erase style—score sheets, it’s a great twist on a classic game.

Jenga - Bigger blocks make for a taller tower. See how high you can build it before it comes crashing down. But watch out when it begins to topple!

Matching Game - A classic game of finding pairs with an oversized twist. Walk through the aisles of giant cards, flipping two over on every turn to try and collect the most matches. 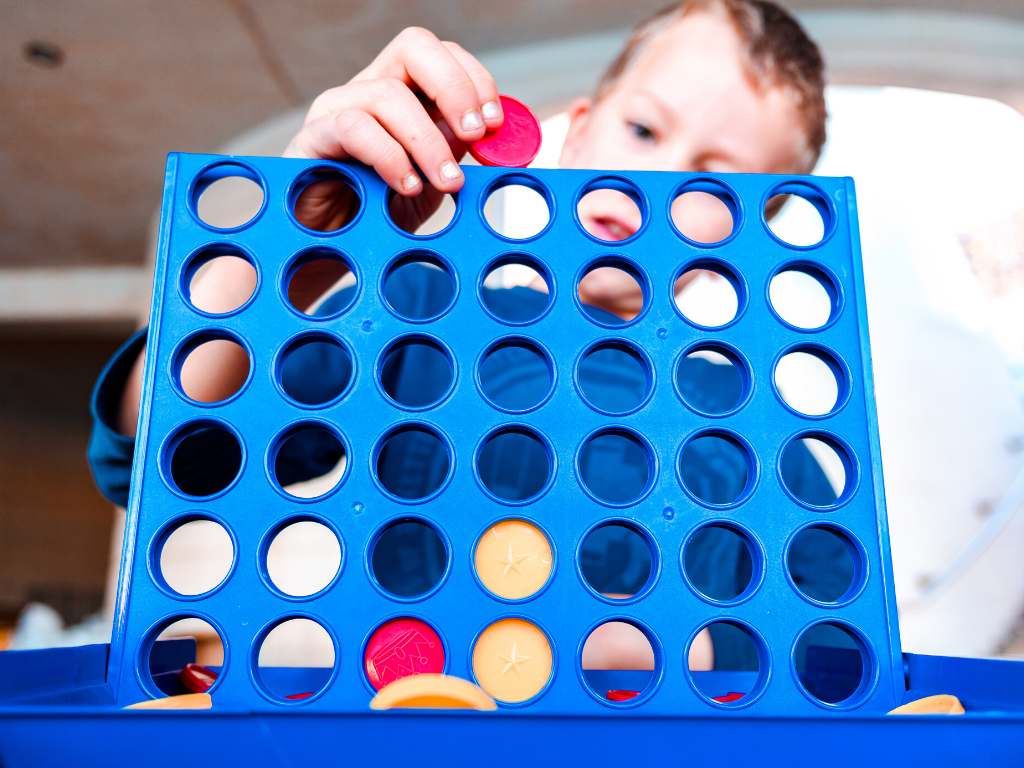 4 In A Row  - Otherwise known as Connect 4. Drop discs into an upright game board. Block your opponent if you can and be the first to get 4 in a row to win!

Step-away from the games everyone already knows and introduce your family and friends to something brand new. Who knows, you might find a new favourite. 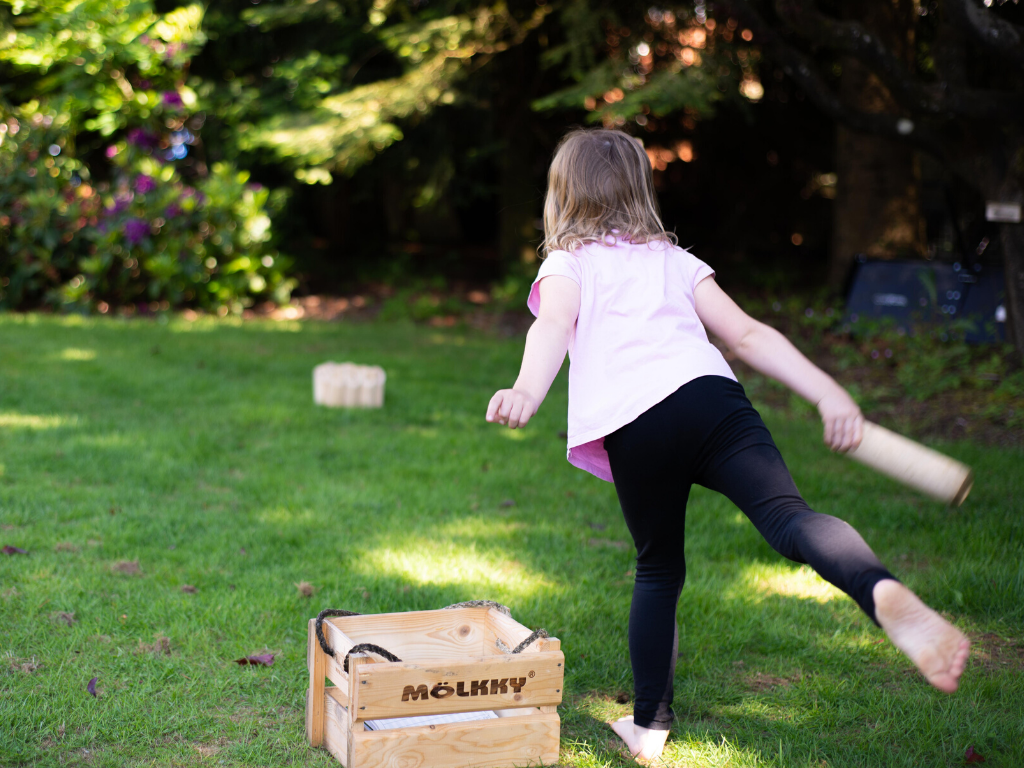 Mölkky - Originally from Finland, this wooden throwing game is all about accuracy. 12 wooden blocks—each labelled with a number representing their point-value—are clustered together. Take turns throwing a wooden pin to rack up your points. A score of EXACTLY 50 is your goal—anything over will send you backwards to a score of 25. The official rules of Mölkky say you can play with up to 26 people per game but it is just as fun with two players.

Mom tip: Younger players may need a little help. An extra throw each turn and/or a closer launching point.

Ladder Ball - It’s a game of many names: ladder toss, ladder golf, monkey ball. But whatever you call it, it’s a perfect summer backyard game. Two to four players take turns throwing their bolas (two balls connected by a string) towards a three-runged target with the goal of wrapping the string around one of the rungs. Play multiple rounds and be the first to 21 points to win. 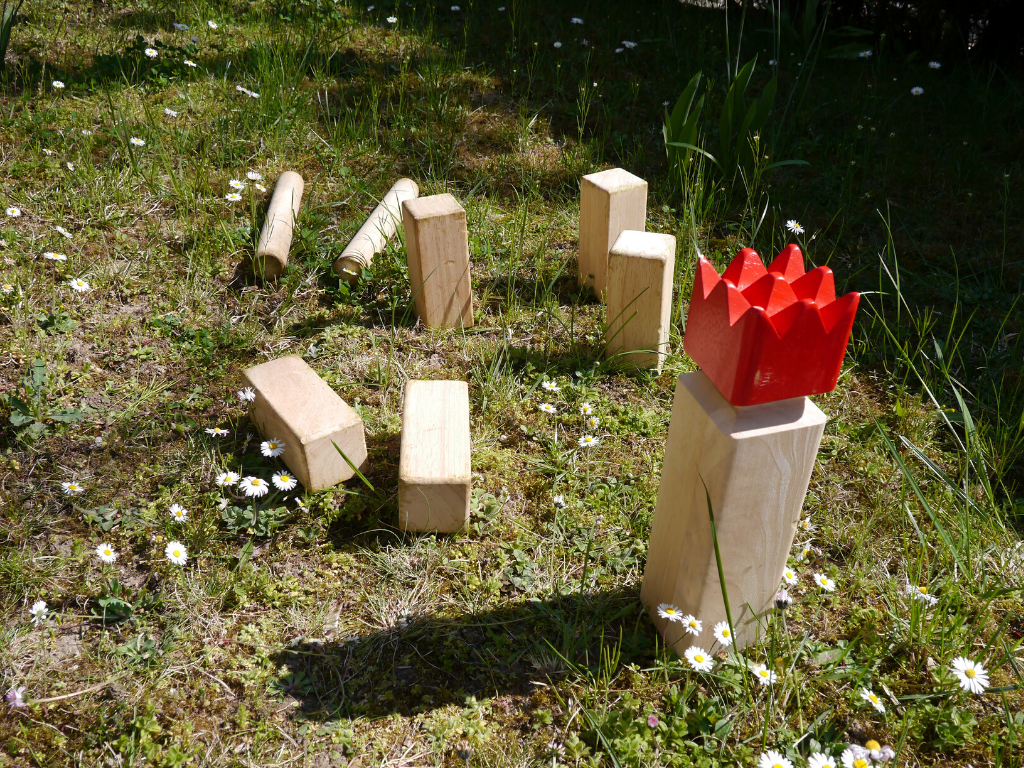 Kubb - Kubb might be a classic game in Sweden—dating back over 100 years—but it is newer to North America. A wooden throwing game rooted in precision where two teams of one to six players each, alternate trying to take out the other side’s wooden blocks—also known as kubbs—before taking aim at the King Kubb in the middle to win.

Keep in mind you will need a playing space of 5 metres x 8 metres to play.

Spikeball - Originally known as roundnet, spikeball is a combination of volleyball and four-square. Two teams battle it out by setting, spiking and volleying the ball onto the springy circular net in the middle. The official way to play is more appropriate for older children—12 and up—but younger kids can have a ton of fun making up their own way to play. 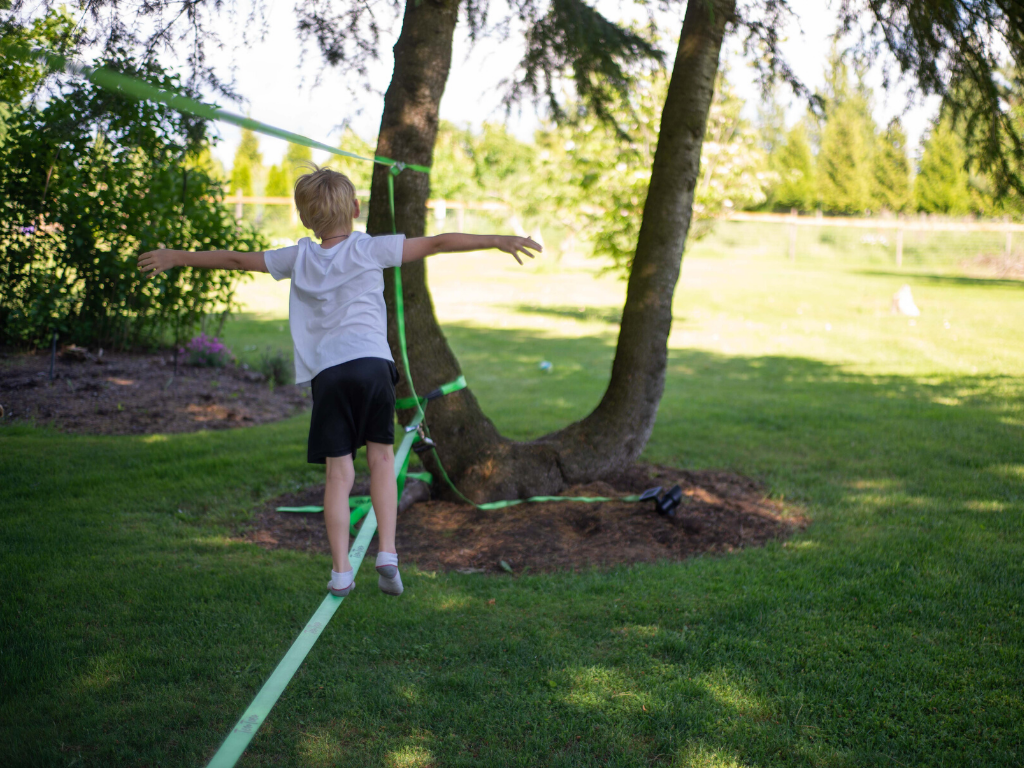 Slack line - Okay this one isn’t technically a game but I had to slip it in here because tight-rope walking—only one or two feet off the ground—in the backyard has proven to be hours of fun. Plus you can easily make it into a competition. All you need is the webbed slackline and two strong anchors—such as large trees—and you can begin walking the line and testing your balance. A second line placed above is perfect for added stability for beginners.

Looking for more inspiration? Check out the blogs below! 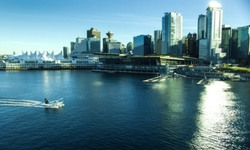 7 Best Places to Have a Campfire in Vancouver 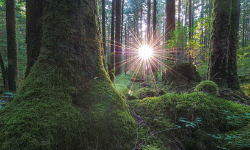 Is this a sponsored post?: No, we simply wanted to share our favourite backyard lawn games with our followers!